According to the elders of Raid Nonglyngdoh, ‘Pnah Kyndeng’ was named after U Ryngkew U Basa, a powerful deity who lived atop a hill of the Raid Nonglyngdoh since time immemorial. 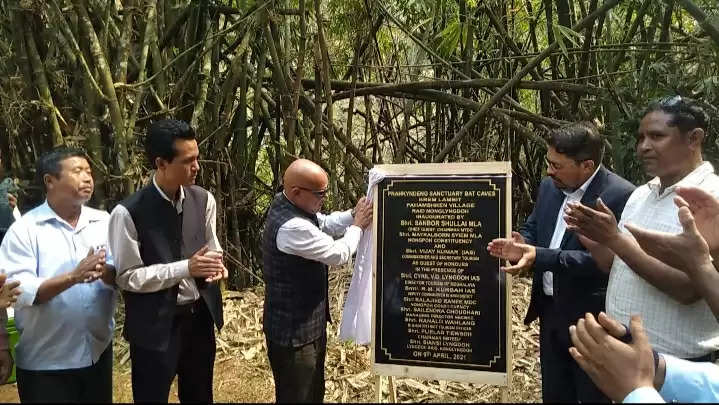 According to the elders of Raid Nonglyngdoh, ‘Pnah Kyndeng’ was named after U Ryngkew U Basa, a powerful deity who lived atop a hill of the Raid Nonglyngdoh since time immemorial.

The Kur Makri (Makri clan) later captured the hill and named it ‘Pnah Kyndeng’. The Makri clan would perform various rituals once a year in the area, and it was later converted to a sacred forest.

“On the steep sides of the hill, there are the famous Bat Caves known locally as Krem Lymbit (bat). Beneath these caves flow the Umngei River. Interestingly, the Umngei river, which flows through this mountain, hides by flowing deep under the rocks for almost 2-3 kilometres before it appears back on the surface of the earth,” locals informed.

“In ancient times, the Makri clan would bring the seeds of a particular breed of rice known as ‘Khawpnah’ which we locally used to cook and eat as ‘Japnah’ or ‘Ja Shulia’ to this sacred forest during the annual rituals to make it fruitful,” they said.

Shullai also visited the caves and promised the Ri Bhoi Tourism and Environmental Developmental Forum (RBTEDF), including the people of Raid Nonglyngdoh, that he would seek a special package for the development of the historical site.

Meanwhile, local legislator Mayralborn Syiem lauded the efforts of the RBTEDF and urged the people to maintain cleanliness as the area would bring a host of benefits in terms of employment and livelihood following its recognition as a tourist spot.