Addressing the gathering, Modi said that Tripura is turning into a new business and industrial hub, and will very soon become an important trade corridor for the Northeast. 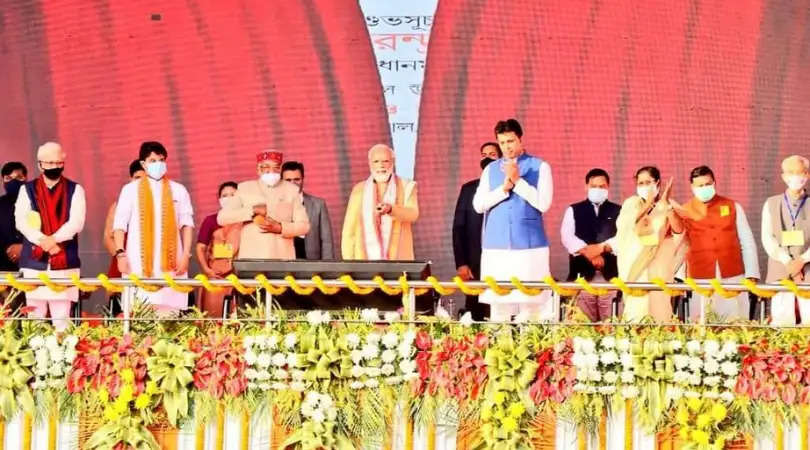 Prime Minister Narendra Modi, on January 4, inaugurated the New Integrated Terminal Building of Maharaja Bir Bikram (MBB) Airport, and launched various projects in Tripura as part of his visit to the state.

Addressing the gathering, Modi said that Tripura is turning into a new business and industrial hub, and will very soon become an important trade corridor for the Northeast. He highlighted the failures of the previous governments to bring about balanced development in the state.

“Unbalanced development where some states lag behind and people are deprived of basic facilities is not good. This is what the people of Tripura have seen for decades,” he said.

Modi, while highlighting that inclusive growth is integral to the overall development of India, stated that 21st century India is moving forward with the spirit of ‘Sabka Saath, Sabka Vikas and Sabka Prayas’, which is one of the key agendas of the current BJP government.

Recalling the times when Tripura witnessed relentless corruption with no intention of development from the government side, the PM mentioned that the current regime came up with the Mantra of HIRA - H to Highway, I to Internet way, R to railways, and A to Airways for improving connectivity in Tripura.

Commenting on the new airport, the Prime Minister said, “The airport is a blend of Tripura’s culture, natural beauty, and modern facilities. The airport will play a big role in enhancing air connectivity in the Northeast. Work is going on in full earnest to make Tripura the gateway to the northeast.”

During his speech, the PM pointed that the centre is making massive investments across all sectors for the development of the state.