For the first time, slogans of 'Bhaicung Murdabad' were heard in the streets of Sikkim, and his effigy was set ablaze. 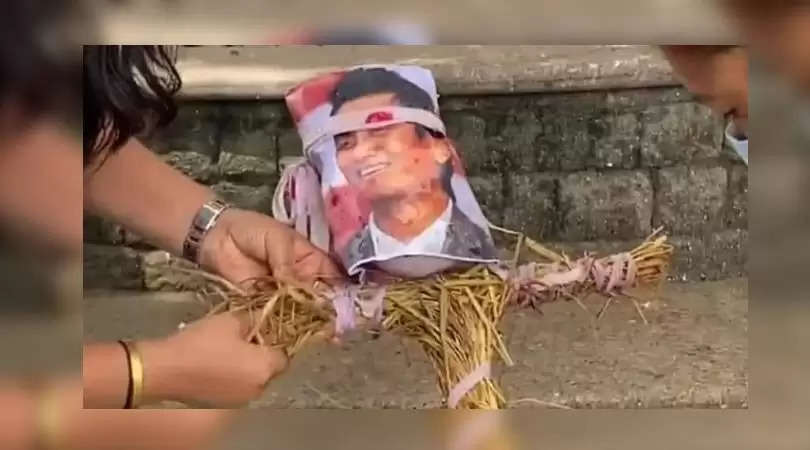 Amid the ongoing COVID restrictions, a group of women under the purported banner of 'Dakshin Sikkim Nari Sangh' (South Sikkim Nari Sangh) shouted slogans, waved placards and burnt an effigy of Bhaichung Bhutia at Central Park, Namchi on Wednesday afternoon.

Earlier, the Padma Shri awardee had objected to the government's decision to construct a 300-bed hospital in Namchi.

He further expressed that the plot of land in question was used for the public as a playground and therefore asked the government to shift the proposed hospital construction elsewhere in Jorethang, letting the playground remain intact.

The Indian football icon, also the founder of Hamro Sikkim Party, is presently in the crosshairs of ruling Sikkim Krantikari Morcha (SKM) for his statements and was countered by senior SKM functionaries on Tuesday.

For the first time, slogans of 'Bhaicung Murdabad' were heard in the streets of Sikkim, and his effigy was set ablaze.

The protesting group countered through placards supporting the Namchi hospital project and shouted slogans warning Bhaichung to 'stop playing with emotions of people of Sikkim'.

Meanwhile, condemning the act, Hamro Sikkim Party (HSP) President Dr Bina Basnett said that "bringing forth the women folks of the party to protest was cowardly."

"We will call it a black day in the history of Sikkim. Never in history has Sikkim witnessed such an unfortunate incident where the son of the soil – who brought in so much of name and fame for not only the state but for the entire nation has been disrespected in his own motherland," she added.

In a tweet, the president also mentioned that HSP has demanded the imposition of the President's rule in Sikkim.