The team of 32 cyclists, led by Col. Ajit Khatri, is planning to cross destinations that are historically important to India’s freedom movement. The rally also hopes to interact with locals and gallantry award winners en route. 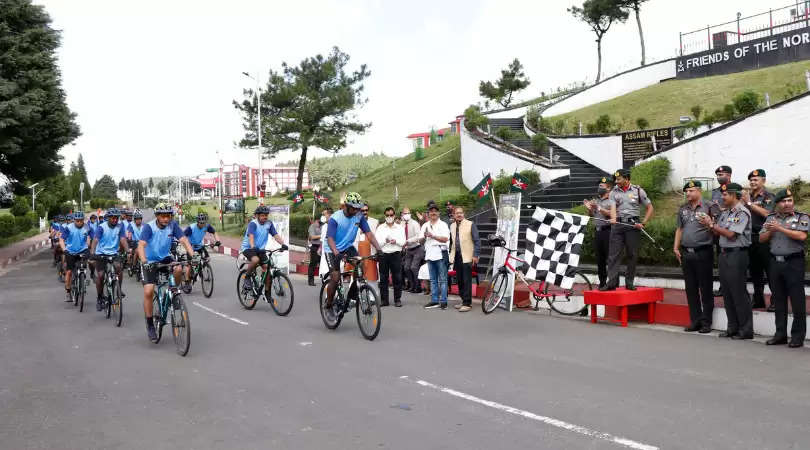 Commemorating 75 years of Indian independence, the Assam Rifles organised a 3000 km cycle rally as a part of the “Azadi ka Amrit Mahotsav” celebrations from Shillong to New Delhi, on Sunday.

The team of 32 cyclists, led by Col. Ajit Khatri, is planning to cross destinations that are historically important to India’s freedom movement. The rally also hopes to interact with locals and gallantry award winners en route.

Speaking at the do, Lt. Gen Nair said that it was significant to get some of the freedom fighters and families of martyrs who laid down their lives for the country to the event.

“It's a great moment to be organising this, particularly keeping in mind that this is the 75th year of independence. In a small way, this is our contribution," Lt. Gen Nair said. “We are reaching out to people who have been freedom fighters in their own right at different locations," he added.

Ninety-five-year-old freedom fighter from Assam, Krisha Lahkar, who was present in Shillong at the ceremony, said that there are 110 freedom fighters across the Northeast who are still alive and this is his second visit to Shillong since 1962.

Along with Lahkar, the event was attended by the next of kin of martyrs, Maha Vir Chakra awardee Captain Keishing Clifford Nongrum, Kirti Chakra recipient Major David Manlun, and all ranks and families of the Laitkor Garrison.

"He has sacrificed his life for the country—for that, we are very proud of him,” said K. Peter, father of Captain Nongrum, while Major Manlun’s father added, "I wish the young men join the military for the security of our Northeast.”

Major Sudhan Preetham M., a cyclist from the 18 Assam Rifles, who is also one of the team leaders, noted that a cycling journey through the Northeast’s hilly and mountainous terrains is a difficult feat. However, the rally is scheduled to connect with local cycling clubs on the way. He said the rally not only felicitates freedom fighters, their next of kin, and gallantry awardees en route to New Delhi, but also aligns with the Centre’s “Fit India Movement” vision.

"Surely, our boys—they're fit enough to cover the distance,” he said. The rally from Shillong across the Northeast will be joined by different groups from Guwahati, and touch Bongaigaon, Siliguri, Kolkata, Ranchi, and Varanasi, and finally reach Rajghat, New Delhi on October 2, 2021 along with 75 other rallies from across the country.

ALSO READ: Reopening Tourism in Meghalaya: Striking a balance between health and economy is the key