MPCC Spokesperson Meitei expressed that it was unfortunate for BJP Spokesperson to hold the public and Congress accountable for the COVID mess in the state, as has been reported in the print media. 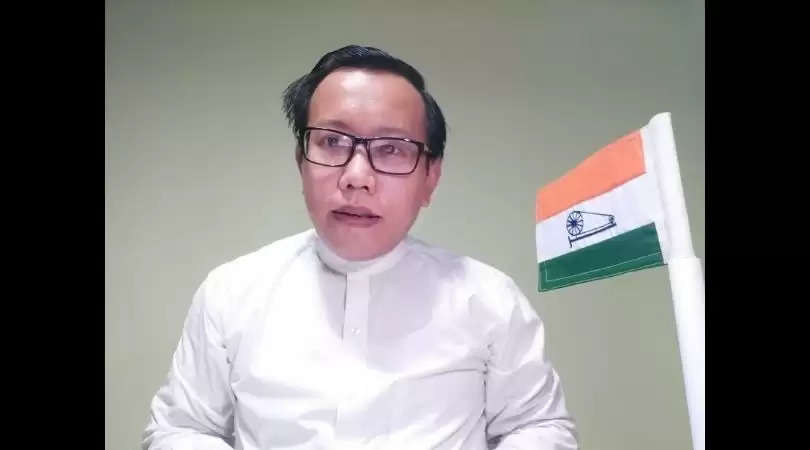 Manipur Pradesh Congress Committee Spokesperson Ningombam Bupenda Meitei, through a virtual live press briefing, posed 21 questions to the state BJP Government on oxygen crisis, shortage of ambulances, non-functioning of ICU beds in District hospitals, vaccination duration and preparedness of the state government for the third wave of the COVID pandemic.

MPCC Spokesperson Meitei expressed that it was unfortunate for BJP Spokesperson to hold the public and Congress accountable for the COVID mess in the state, as has been reported in the print media.

Meitei said that the reality of the present BJP state government was its inability to share the daily mortality rate and daily positivity rate with the public.

He further stated that MPCC President K. Govindas, as a part of the 30th martyrdom of former Prime Minister of India Rajiv Gandhi, had already donated one ambulance for COVID relief to Community Health Centre at Ningthoukhong for Bishnupur Assembly Constituency.

Wangkhem Assembly Constituency MLA K. Meghachandra has also given one ambulance for COVID in his constituency, Meitei stated.

The Congress spokesperson also highlighted Thangmeiband MLA Kh. Joykisan's concern on the necessity of CSOs to unitedly fight against the COVID pandemic adding that the state government has done much and failed for the public.

He also raised concerns about the weekly increase in positivity rate and mortality rate in the state.

Meitei maintained the need of having RT-PCR test centres in all district hospitals, instead of Rapid Antigen Test, giving reasons that the rural infections have surged with a positivity rate of 17% (260/1507), as recorded in the IDSP-COVID update on May 14, 2021.

A number of pertinent questions were raised by the MPCC against the BJP government in the state, some of these were:

1. The allocation of (Liquid Medical Oxygen in MT) for the state of Manipur from the central pool.

2. The projected demand for oxygen for Manipur.

3. How many MT (metric tonnes) of oxygen are required per day in Manipur?

4. What are the buffer stocks of oxygen for emergency use in Manipur?

5. Can the Oxygen Express train reach Jiribam of Manipur to bring oxygen for the state?

6. What are the quantities (in Metric tonnes) available of oxygen for the following requirements?

8. What will be the compensation from the state government to the families of COVID patients who died due to oxygen shortage, whether in hospitals or at home isolation?

9. What is the status report of black fungus (mucormycosis) cases in Manipur?

10. What are the daily oxygen demands of each district in Manipur?

11. How many functioning government ambulances are there in each district of Manipur?

12. How many District Hospitals are having functional ICU facilities equipped with ventilators, doctors and staff to treat covid patients?

13. What is the amount released by Manipur BJP Government to buy pulse oxymeters and medicines for home isolation covid patients, as stated and posted by Chief Minister on social media yesterday?

14. The duration of free vaccination drive for the 18 and 44 age group in every district of Manipur?

15. When will the second dose vaccination drive start in Manipur?

16. How long will the state government take to vaccinate all the eligible beneficiaries in the state?

17. What are the results of the genomic sequencing of covid samples sent from Manipur?

19. How can a common man know about the availability of oxygen beds fully equipped with ventilators and ICUs in all the hospitals in the state?

20. Where is the functioning dashboard on a real-time basis, operated by war room to combat the second wave of the COVID pandemic in Manipur? Is there a dedicated 24×7 war room on the COVID situation in Manipur?

21. What is the percentage of state GDP which has been utilised to combat the second wave of the COVID pandemic in the state?

22. What is the amount released from the state exchequer to fight the second wave of the COVID pandemic?

If the above questions are answered by the government, then there is a strong possibility of succeeding in the united fight against the third wave of the COVID pandemic, Meitei said.

He concluded by questioning the government on the steps being taken by the BJP led government to tackle the COVID crisis in Manipur.