The adjournment motion was moved by both Congress leader Debabrat Saikia and AIUDF MLA Aminul Islam on the “land policy” of the state government. 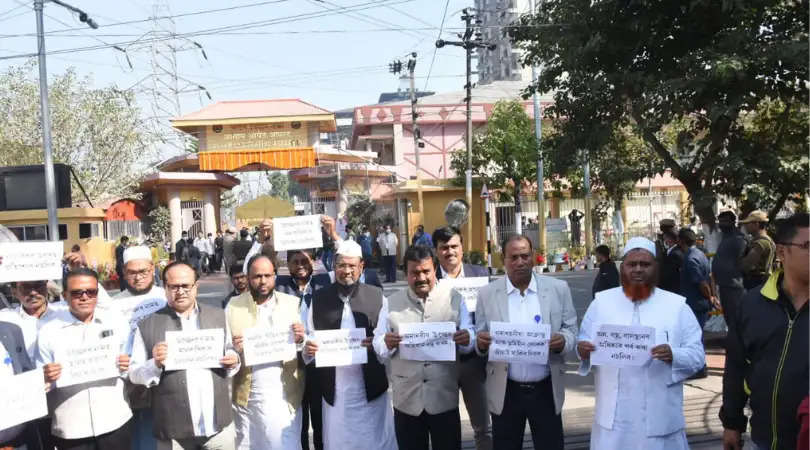 The first day of the Assam Legislative Assembly winter session which began on December 20 saw opposition parties-Congress, All India United Democratic Front (AIUDF), and Raijor Dal stage a walkout after Biswajit Daimary disallowed them to discuss an adjournment motion in the House.

The adjournment motion was moved by both Congress leader Debabrat Saikia and AIUDF MLA Aminul Islam on the “land policy” of the state government.

The speaker first rejected an adjournment motion moved by the opposition to discuss over Gorukhuti eviction drive saying that the matter has been under sub judice.

Later the opposition members brought the issue of alleged “land grabbing by the family of Assam chief minister Himanta Biswa Sarma” which rocked the first day of the winter session.

Amid the ruckus, opposition leader Debabrata Saikia said they moved the adjournment motion in the House to discuss the “land grabbing” allegations against a private firm RBS Realtors, where the family of Assam chief minister Himanta Biswa Sarma were allegedly involved.

However, the speaker rejected the motion saying that he found no ground to admit this motion for discussion in the House.

The speaker has rejected the adjournment motion without mentioning the “resolution” of the motion which has irked the opposition MLAs and they created a ruckus on the floor of the House.

Raijor Dal MLA Akhil Gogoi also sought the speaker's permission for discussion over alleged “land grabbing by the family of the chief minister in the House, which has led to a war of words between the members of the ruling party and the opposition.

The ruling party MLAs and its allies counter-attacked the opposition by raising the issue of alleged “land grabbing” by MLA Akhil Gogoi for the Orchid Park in Kaziranga.

Later Saikia said, “The speaker has rejected the motion without allowing us to speak of its admissibility in the House. It is an issue of public importance and urgency. We want to discuss the people who have been evicted from their land in various places of the state. We want to discuss those Indian citizens who are yet to find out a way of livelihood after the eviction.”

The government has allotted land to a company RBS Realtors flouting all established norms under the Land Policy 1989, New Land Policy 2020 and Ceiling Surplus Land Rules 1956. It was revealed that the chief minister’s family is involved in it. Moreover, the BJP Kishan Cell president also got land flouting all rules. So we want a discussion in the House,” Saikia said.

“According to the rules, the government can’t allot land for the business purpose under the established laws, but the landless farmers,” he further said.

“We want a probe by a civil judge into it so that such corruption in land allotment can be averted in further,” he added.

“In my 25 years of experience as MLA, I never saw the speaker disallowing a motion by this way,” said the deputy leader of Congress Legislature Party Rakibul Hussain.