But the opinion polls earlier had predicted a neck-and-neck tussle, only to be proven otherwise on Sunday, as the Opposition Congress-led Mahajot could garner just about 50 seats. 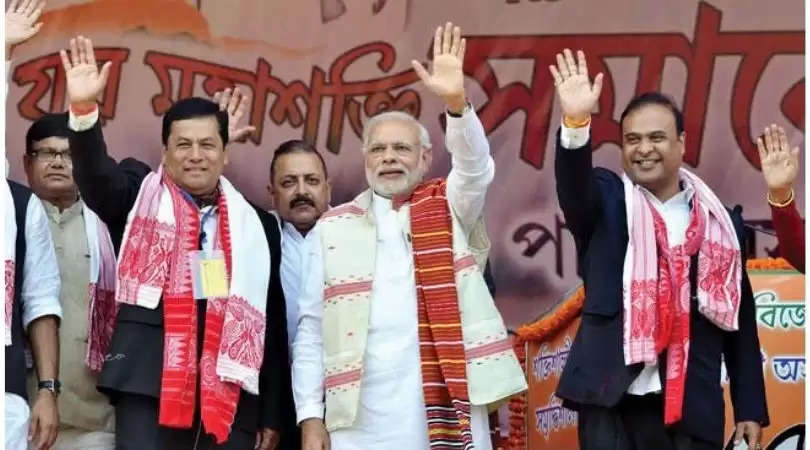 The outcome of the Assam Assembly elections was quite in sync with the exit polls, with the BJP-led National Democratic Alliance retaining power in the state with an absolute majority, bagging 75 of the 126 seats, also becoming the first non-Congress party in Assam to lead an alliance to victory for a second successive term.

But the opinion polls earlier had predicted a neck-and-neck tussle, only to be proven otherwise on Sunday, as the Opposition Congress-led Mahajot could garner just about 50 seats.

Of the 50 seats, the 'grand old party' could get only 29 while the Badruddin Ajmal-led All India United Democratic Front (AIUDF) could get 16 and Bodoland People’s Front (BPF) just four.

Asked what went wrong for the Congress, S. Varma, an Upper Assam-based political analyst said that the party made a meal of it in the first phase of the polls itself, winning just eight of the 47 seats.

“The Congress failed to adopt an aggressive and systematic strategy which hit them hard. The local leaders could neither understand the ground reality nor the pulse of the electorate. They weren’t visible enough to make an impact,” Varma said.

While the “5 Guarantees” per say were good, he said, “but the Congress did not do enough over a period of time. We only saw national leaders making a presence just weeks ahead of the polls, which is not the right strategy. Besides, the party’s assurance on wage failed to cut ice among the tea garden electorate.”

Moreover, the pre-poll pact with AIUDF negated the Mahajot’s prospects as voters, particularly in Upper Assam, perceived an influx threat in the alliance, the analyst said.

Experts, in general, have also opined that the BJP’s better electoral management, discipline and connect with the people (through a series of welfare schemes), have sealed the deal for the Mitrajot.

“Over and above, barring the period in the run-up to the poll that saw some urgency to basically get votes and seats, the fact the Congress seemed to be away from the people and did not understand the pulse of the electorate, cost them dear at the end,” one of them said.

But the BJP masterstroke of tying up with the United People’s Party Liberal (UPPL) and Gana Suraksha Party (GSP) worked wonders for the Mitrajot, as it not only ensured that the alliance gained from the simmering anti-incumbency against the Hagrama Mohilary-led BPF in Bodoland Territorial Region (BTR) but also made certain that the non-Bodo votes are bagged by the alliance.

And it worked. The UPPL bagged six of the eight seats it contested. For a party making its debut in the general elections, the outcome was more than satisfactory.

Not just that, all the three BPF ministers – Pramila Rani Brahma, Chandan Brahma and Rihon Daimary – had to bite the dust. This is quite in contrast to the BPF record of bagging all the 12 seats in the previous Assembly elections.

BJP key strategist Himanta Biswa Sarma proved to be the talisman once again, courtesy a well-calibrated, aggressive strategy, besides leading from the front as a health minister during the tough pandemic phase and connecting with the common man during the poll rallies.

On the contrary, the leadership role (at the local level) was missing in the Mahajot.

UPPL chief Pramod Boro had summed up the outcome in an interview to the media on Sunday, saying that the Mahajot, unlike the Mitrajot, “did not have or could not project the leader of the team”, which is what cost them.

Another expert said that the BJP-led government had through its development agenda, strategically backed up by a slew of welfare schemes for the economically disadvantaged women and tea workers, scored more brownies than the Opposition.
“It has brought about this concept of pro-incumbency as against anti-incumbency,” he said.

The newly-formed regional parties could not make much of an impact with the Assam Jatiya Parishad (AJP) failing to open its account in the polls.

But the triumph of firebrand anti-CAA activist and Raijor Dal president Akhil Gogoi in Sibsagar, was the silver lining, as history was scripted in a way, with the peasant leader winning an election from jail (currently undergoing treatment in a hospital).

“It was understandable that a party like AJP, formed in September last year, could not make a mark as it was too new for electoral politics. In a way it helped the BJP in Upper Assam as it took away votes from the Congress-led alliance even as the CAA factor did not quite work overall,” he added.