Sources said the smuggling of elephants from the Upper Assam region is not a new thing. Earlier, many elephants were smuggled from the region to other states. 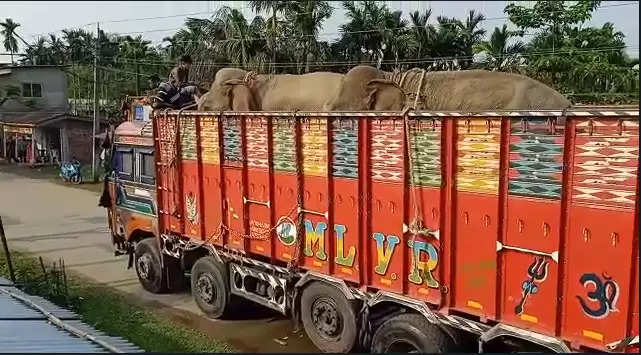 Makum police intercepted a truck with two captive elephants at Upper Assam's Tinsukia district on Sunday night. The truck was on its way to Odisha from Arunachal Pradesh.

According to forest officials, the truck had fled a police check post at Kakopathar, prompting the patrolling team to alert their counterparts at Makum.

Police managed to detain the truck and handed the elephants to the forest department for verification.

“They have also given some papers, including permission to transport the animals by principal chief conservator of forest in Arunachal Pradesh and a veterinary doctor’s report,” said a forest official.

Sources said the smuggling of elephants from the Upper Assam region is not a new thing. Earlier, many elephants were smuggled from the region to other states.

Wildlife activist Devojit Moran alleged that the forest department was hand-in-gloves with the smugglers adding that from time to time, they sent elephants to other states after taking huge money.

“The DFO of Doomdooma, Atiquor Rahman, is hand-in-gloves with the timber smugglers and other wildlife smugglers and is running the whole nexus in this region,” Moran alleged.

Moran questioned the silence of wildlife activists of Assam on the issue.

“Elephants were smuggled from this area but no wildlife activist and social organisations (have) raised (their) voice against the issue. The smugglers killed elephants and smuggled the tusks of dead elephants in other states after taking huge money," the activist alleged.

In June 2019, the chief wildlife warden and principal chief conservator of forest wildlife had permitted to transport four elephants from Upper Assam’s Tinsukia and Dibrugarh district to Gujarat for religious purposes, evoking strong resentment among wildlife activists and nature’s lovers.