According to initial reports received from the districts, 10 persons have received injuries (Darrang: 6, Kamrup Metro: 1, Nagaon: 1 and Sonitpur: 2). 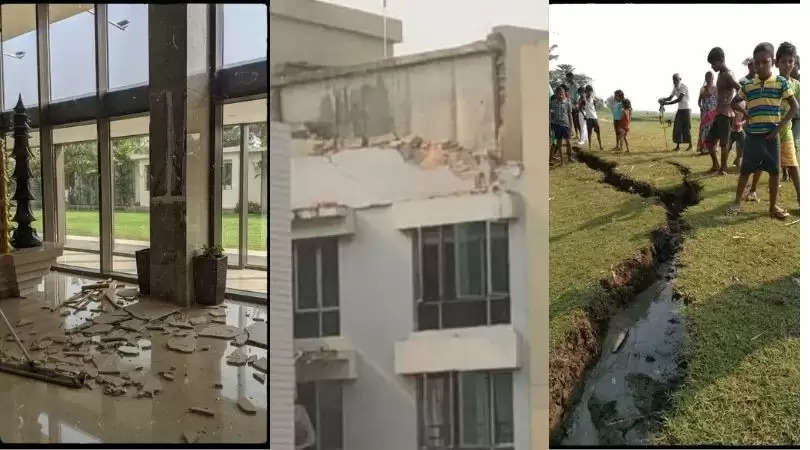 A major earthquake of a magnitude 6.4 on the Richter scale, followed by as many as ten aftershocks jolted Assam on Wednesday.

The epicentre of the quake, reportedly one of the biggest in the state since the most destructive earthquake of 1950, was traced to Sonitpur district (at 26.690 North and 92.360 East), occurring at a focal depth of 17 km.

The epicentre is closer to the plate boundary and located about 80 km northeast of Guwahati; 132 km north of Shillong and 180 km west of Jorhat.

A report of the Assam State Disaster Management Agency received on Wednesday evening stated that ten aftershocks of varying magnitudes from 2.9 to 4.7 on the Richter scale (epicentre primarily in Sonitpur district) were felt between 7.51 am to 5.40 pm.

According to initial reports received from the districts, 10 persons have received injuries (Darrang: 6, Kamrup Metro: 1, Nagaon: 1 and Sonitpur: 2).

“No casualty resulted due to earthquake injuries reported but two persons (one each in Kamrup Metro and Nagaon districts) died due to shock/heart attack around the time of the earthquake,” the ASDMA report said.

Cracks have been developed in many private and public buildings. However, reports of any severe damage like the collapse of buildings or disruption of any major infrastructure have not been received so far.

Detailed damage assessment is going on in coordination with agencies like DDMAs, fire and emergency services, SDRF, NDRF and the experts from Assam Engineering College.
Further, ASDMA coordinated with NDRF for immediate deployment as and when necessary.

The State Emergency Operation Centre (SEOC) is in touch with all District Emergency Operation Centre (DEOCs) across the state for quick and accurate assessment of damages.
ASDMA has shared the contact details of SEOC (1079/1070) and DEOCs (1077) in social media and electronic media to facilitate the people reaching to the state machinery for earthquake-related assistance.

Tremors were felt in other states of the Northeast as well.

The preliminary analysis shows that the events are located near to Kopili Fault closer to Himalayan Frontal Thrust (HFT). The area is seismically very active falling in the highest Seismic Hazard zone V associated with collisional tectonics where Indian plate subducts beneath the Eurasian Plate.

Visuals of a building leaning into another in Nagaon town beside a video of water gushing through the ceiling of a bedroom from a damaged overhead tank in an apartment in Guwahati were also going viral on social media.