Mourning the death of the accident victims, Assam chief minister Himanta Biswa Sarma announced an ex-gratia amount of Rs 1 lakh to the kin of the deceased. 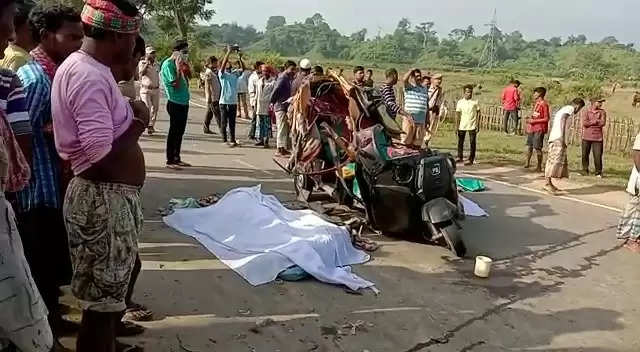 In a tragic accident, 10 persons, including women and children, were killed on the spot after a truck rammed into an auto-rickshaw at National Highway 8 in Karimganj district of Assam, on November 11.

As per reports, the mishap took place early in the morning when the cement-laden truck, travelling towards Karimganj from the Tripura border, collided head-on with the autorickshaw carrying several passengers.

"Most of the people killed in the accident were women and children. They were travelling back home in an auto after performing Chhath Puja," Padmanav Baruah, SP, Karimganj informed.

"Among the ten victims, there were three men, five women and two children, and most of them were from Nongi Tea Estate of Patharkandi," Baruah said.

"Nine people died on the spot and one person was taken to hospital in a serious condition," he said, adding that the person later succumbed to his injuries.

An eyewitness claimed that the truck driver was speeding and could not control the vehicle to avoid the collision. The truck has been seized but the driver, however, managed to flee, the police said.

Meanwhile, mourning the death of the accident victims, Assam chief minister Himanta Biswa Sarma announced an ex-gratia amount of Rs 1 lakh to the kin of the deceased.

Just hours after the accident, Sarma tweeted, “I deeply mourn tragic death of 9 persons in an accident at Baitakhal, Patharkhandi this morning. One injured is admitted to hospital. @assampolice is trying to trace driver of the truck who had fled the scene after hitting the auto deceased were travelling in (sic).”