The party leaders are now struggling to gain semblance on how to make the most of the two important issues for political gains in the 2023 state elections – the Inner Line Permit (ILP) and beef politics. 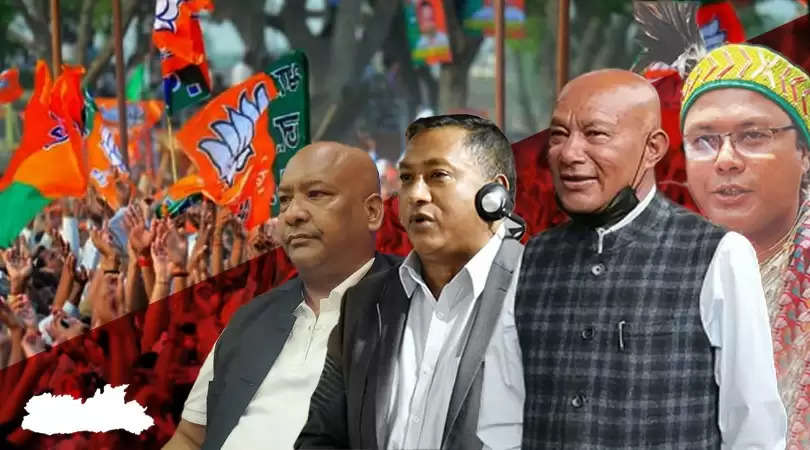 The BJP wave, which has gained significant traction in the northeast, is now characterised by severe infighting, a quest for power and ambitions without a strategy in Meghalaya.

The party leaders are now struggling to gain semblance on how to make the most of the two important issues for political gains in the 2023 state elections – the Inner Line Permit (ILP) and beef politics.

Despite the intermittent demands, agitation, and vandalism by various political parties (including their coalition partner in Meghalaya Democratic Alliance (MDA), Hill State People Democratic Party) and pressure groups over the ILP and concerns of vendors and citizens on the recent cow protection bill of Assam, the state’s BJP leaders have done nothing but maintain a profound silence on the issues.

Following cues of silence from the central leadership, the state’s BJP has been treading carefully to avoid decision-making, bold statements, or even a coherent stance, mostly putting the inter-state border disputes of the state as a shield on the forefront.

Some BJP leaders of the state have, however, already jumped the gun, throwing the image of the party into a frenzy.

The recent visit of Home Minister Amit Shah left the parochial Khasi Student Union, and other tribal organisations, in disappointment when it came to discussing the highly-debated ILP.

However, despite no word from the central leader, the newly inducted cabinet minister of BJP Sanbor Shullai pulled out a “bargaining chip” to ask people to “eat more beef” and vote for the BJP in 2023 to “get ILP in five minutes”.

Shullai’s “impulsive” statements were immediately retorted by BJP national general secretary, Arun Singh, who reiterated that the party is “definitely not in favour of beef-eating”. Shullai also made national headlines after being pulled up by the Shiv Sena, which questioned the “double standards” of the party.

The BJP’s member of the district council in Garo Hills, Bernard Marak, took the oral blunder a step further after he claimed that Shah was presented with a situation to “choose the Sixth Schedule or ILP”. But his party members soon rubbished the claims, calling it’s his “personal interpretation” of the meeting.

Any wayward talk of ILP is now immediately neutered by party authorities, leaving interested parties with only a string of conflicting statements to parse.

Although the citizenry itself remains divided over the actual need or effectiveness of ILP, it can’t be denied that the concern may very well become a fruitful, forever-vote bank issue given that Meghalaya’s BJP has failed to put forth a sincere agenda for 2023 elections.

More so, confusion and mayhem are the preferred choices of action for the party to keep difficult demands from various pressure groups at bay for the time being.

The present course of events however does not just present the picture of chaos in the state BJP. It also tells us about the struggle of and for leadership.

Alexander Laloo Hek, the legislator and former health minister of the state, who had to clear the way for Shullai to step up to the cabinet last month, has expressed interest numerous times to assume the position of the party president in Meghalaya; despite the current president Ernest Mawrie not completing his term.

Mawrie, disgruntled at the pitch of Hek, dismissed any possibilities of him stepping down after highlighting the party’s convention of one-person-one-post. However, Mawrie has faced opposition in the past, when his style of working has been called ‘dictatorial’ by many state BJP members.

In February this year, some party leaders became signatories of a complaint report against Mawrie which they sent to Home Minister Amit Shah.

Taking cognizance of the situation, a suspended party leader from Garo Hills KC Boro recently said that the BJP is divided into two camps – the Mawrie camp and the Hek camp – where members mostly want Hek to step in.

With all the problems that the party is currently facing, opportunistic communication will only keep the populace occupied for some time.

While the central leadership of BJP may be mulling over its actual plan for the state, it cannot necessarily involve beef politics or ILP — one a detriment to BJP’s Hindutva manifesto and the other, a cosmetic change at the most.