TNT Analysis | Could NRC help BJP do a 2014 in Assam next year? Figures suggest so 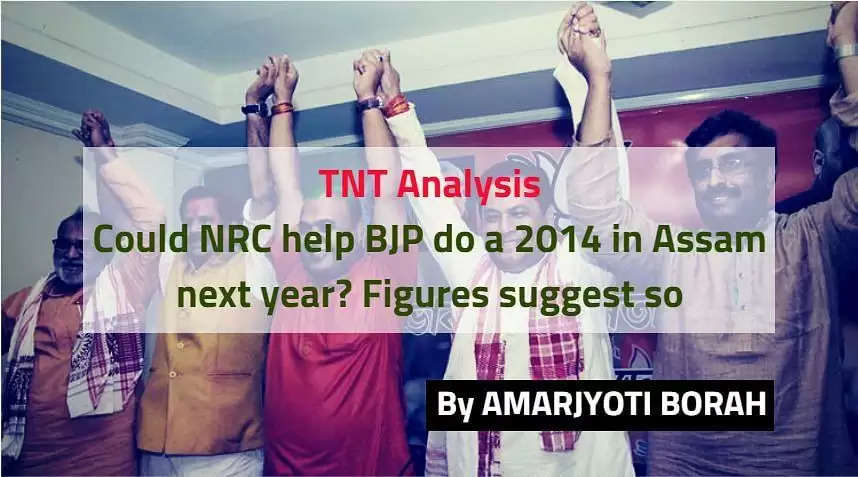 The BJP managed to win its highest ever seats—7 out of 14 in Assam in the 2014 Parliamentary election riding on the issue of illegal immigrants, and now there seems to be a possibility of repeating the same feat with the National Registrar of Citizens (NRC) as a poll plank.

However the narrative changed sharply in favor of the BJP in 2014.

As the Prime Ministerial candidate, Narendra Modi's well packaged and crafted statement alleging that—Rhinos are being killed at the Kaziranga National Park to settle Bangladeshi immigrants there, turned out to be a defining point, and ultimately the major vote catching line.

Modi had then identified the right issues for Assam—illegal immigrants, which has always been a major issue in Assam, and the rampant rhino poaching in the state. His statement struck the right chord, and it helped win the record number of seats.

Modi had said as the PM candidate, "Aren't rhinos the pride of Assam? These days there is a conspiracy to kill it. I am making the allegation very seriously. People sitting in the government are doing this so that the area becomes empty and illegal immigrants can be settled there."

He had further warned, "Those who are conspiring to finish off rhinos, they should listen to this carefully- after May 16 (Counting day), they will be taken to task".

Though the issue of illegal immigrants turned out to be the catalyst, other issues like- development, infrastructure, connectivity, jobs, better economy and packaged as Acche Din, also played a role.

However the former was the major reason behind the high voter turnout in favour of BJP.

The voting percentage in Assam in that election turned out to be the highest ever- 79.88 percent. The Congress was shocked- as a higher percentage of voting in the state in the parliamentary elections usually means bad news for the Congress.

The AGP was formed in 1985 and was not recognized as a political party yet by the Election Commission of India and the candidates fought as independents, and in that election the centre stage was detection and deportation of illegal immigrants. It was very similar in 2014, just that it was the BJP which took the centre stage and almost all the major election issues of the AGP were taken and repackaged by the BJP.

The 3 parliamentary elections, in which the Congress had fared badly— 1985, 1996 and 2014, has few similarities—there was heavy voting, the main election plank was illegal immigrants and deportation, and there was a wave.

The release of the draft NRC on July 30, 2018 appears to have come as an icing on the cake ahead of the 2019 parliamentary election for the BJP in Assam. The statements and protests against the NRC process by the opposition Congress, including leaders of the Assam Pradesh Congress Committee, is in fact helping the BJP and are almost putting on a platter the favorable conditions for a BJP sweep in Assam.

What the Congress leadership in New Delhi and the present leadership in Assam have probably missed out is that the former Assam Chief Minister Tarun Gogoi had tactfully maintained a distance from the Muslim political groups, including Badruddin Ajmal and his political party-the AIUDF, in a cleverly devised strategy not to lose the votes of the other communities.

Prior to his forming the AIUDF, Ajmal had tried to dictate his terms on the formation of Gogoi's government in 2001, but Gogoi had brushed aside most demands.

Gogoi refused majority of Ajmal's demands prior to the Assam assembly election in 2006 as well, which included election tickets for many of his choice of candidates. However the final nail was in the form of the Supreme Court's verdict on July 12, 2005, scraping the Illegal Migrants (Determination by Tribunals) Act***, 1983 that was existent only in Assam, in response to a petition filed by incumbent CM Sarbananda Sonowal, then an AGP leader. Ajmal, then alleging that Muslims are being harassed across the state, sought Gogoi's intervention on the issue, but the later refused to budge (of course fearing alienation of votes of the other communities).

Ajmal then formed the AIUDF, hoping to be the deputy Chief Minister post election, or atleast the king maker.

In the election campaign, Gogoi had said, "Who is Ajmal. He is just a businessman", and had also said that he will prefer to resign as Assam CM then form a government with Ajmal.

This gambit worked perfectly in that election, and the Congress was able to sweep many of the urban constituencies. (most of the urban and non Muslim dominated areas are opposed to Ajmal). However the Congress was short of the majority by 10 seats, and though Ajmal (who had 10 seats) tried to reach-out to Gogoi several times, Gogoi formed an alliance with the Bodoland People's Front.

Gogoi used it as a strategy throughout the remainder of his political career, and succeeded again in the 2009 parliamentary election and 2011 Assembly election.

It seems the present Congress leadership has failed to take out a leaf from Gogoi.

Though the NRC updation is a Supreme Court monitored exercise, and the tri-partite talks for it had begun in 2005 when the Congress was in power at both the Centre and in Assam, for the common people, the credit goes to the present government in power. They are able to sense a connect—Modi's aggressive campaigning on the issue, Sarbananda Sonowal becoming the Assam chief minister in 2016 (the man responsible for repealing the IMDT), Sonowal's first visit after taking charge as the CM—to the NRC head office, and publication of the draft NRC within 2 and a half years of the BJP coming to power in Assam. The momentum on the issue of illegal immigrants and NRC did not get lost, and was always there since Modi's speech promising deportation of illegal immigrants in 2014.

Also, according to the voters, this is a government which can deliver and keep promises—none of the previous governments, whether AGP or Congress had made any concrete attempts to update the NRC or deport illegal immigrants, though they promised the same in the election campaigns and manifestos.

Both in 2014 Parliamentary election and 2016 Assam assembly election, the voting percentage was huge, and the biggest loser was the Congress. Congress dropped to its lowest tally in both the Parliament and the Assembly.  The AIUDF managed to make inroads into the Bengali speaking Muslim community dominated areas which were traditionally Congress bases, and the BJP managed to cut into the areas with Hindu, Assamese speaking Muslim community, and other religious minority communities' presence.

In 2014, the Congress lost seats which the party had been winning since over 2-3 decades and no one had expected a BJP win there, and clearly underestimated the pulse of the voters.

The question now is whether the issue on NRC updation could act as a catalyst for the BJP in 2019, and if that happens, the BJP could even be able to win more seats than 2014 in Assam.

However, it is important to keep in mind that even a week is enough to change political scenario drastically in India, and 8-9 months which is left for the election is surely a long time.

PS: **Though the 8 th Lok Sabha elections were held in 1984 across India, the elections in Assam and Punjab were delayed till 1985.

***IMDT: The Illegal Migrants (Determination by Tribunal ) (IMDT) Act was an Act of the Parliament of India enacted in 1983 by the Indira Gandhi government, and was applicable to the state of Assam only whereas in other states, detection of foreigners was done under The Foreigners Act. In its judgment, the Supreme Court held that the Illegal Migrants (Determination by Tribunals) Act, 1983 and rules has created the biggest hurdle and is the main impediment or barrier in the identification and deportation of illegal migrants.

The writer can be reached at amarjyotiborah@gmail.com