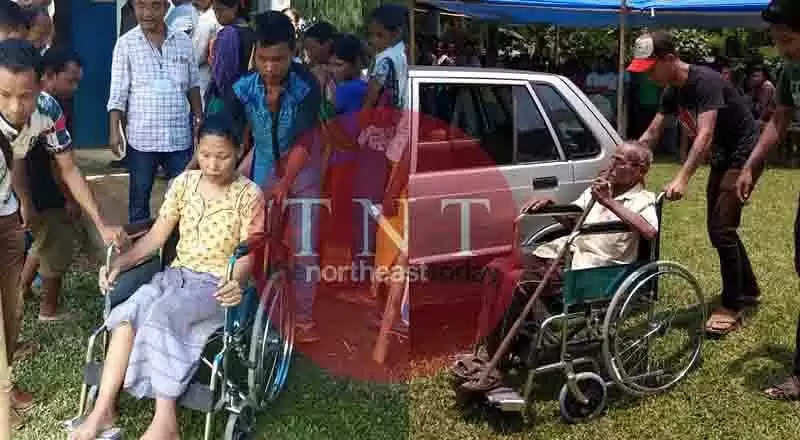 AMPATI, May 29, 2018: The people of Ampati Assembly constituency on Monday came out of their houses to exercise their franchise to choose former chief minister Mukul Sangma's successor in one of the most bitterly-contested elections this constituency has witnessed.
Nearly 91 per cent of the total 28,699 electorate cast their votes Monday as polling for the by-election to Ampati assembly election in Meghalaya ended.
Polling began at 7 a.m. in all the 39 polling booths amidst heavy security.
Voters came out in high spirits to elect their new leader.
"90.42 per cent of the electorates voted in the Ampati by-election. The percentage is likely to increase once all the tabulation is completed" Chief Electoral Officer, Frederick Roy Kharkongor said.
The highest polling was witnessed at Jelbongpara where the turnout was 96.81 per cent. The lowest turnout was 83.52 per cent, at Morkona.
He said the voting passed off peacefully with no report of any poll-related incident.
The run up to the polls saw unprecedented allegations against both parties – with Ampati becoming the battleground to one of the most interesting elections in the recent past in Garo Hills. Many sections also saw violence between the two parties.
Only one of the VVPAT machines malfunctioned in a polling station which was replaced immediately.
Thakuranbari and Jelbongpara with 96 percent each stood out amongst the polling stations with the highest polling %. Others, such as Godalgre 92%, Rangsa Abanggre 92%, Chodonpara 93%, Kongpara 85%, Joyfur 85%, also witnessed record turnouts among voters eager to exercise their franchise.
The by-election was necessitated after Leader of Opposition and former Chief Minister Mukul M. Sangma vacated the seat while retaining the Songsak assembly seat.
Mukul's eldest daughter Miani D. Shira is confident she will retain the Ampati  seat for the Congress.  Her main rival is Clement G. Momin of the ruling National People's Party, who is supported by the BJP and regional parties. Subhankar Koch is also contesting the by-election as an Independent.
The by-poll holds big significance for the Congress to stake claim to form government following Karnataka. The Congress had staked claim to form government in Manipur, Goa and Meghalaya.
The Congress and the NPP have 20 members each In the 60-members Meghalaya Assembly.
The ruling NPP is supported by United Democratic Party, People's Democratic Front, Hill State People's Democratic Party, Bharatiya Janata Party, Nationalist Congress Party besides two Independents.
Meanwhile, Congress candidate Shira today filed another complaint with the returning officer, Dikki D Shira complaining of distribution of money, assault on her party workers as well as the presence of the CM, Conrad Sangma in Ampati, allegedly violating the poll code of conduct that is in effect at the constituency.
Miani complained that Nipen Koch, MDC of Kumiligaon and Prema Koch (BJP member) were distributing money to villagers at Samatigaon and were moving towards Murikati and Bandrakona. She also complained that there were a lot of people in the house of Nipen Koch. Nipen was a Congress member recently defecting to NPP in GHADC.
Miani further alleged that the CM, Conrad Sangma was seen passing through right in front of her house in Chengkompara, all the while avoiding the cameras that were placed around Ampati.
"The convoy had around 30 vehicles and were moving through town though ensuring they did not come in the various CCTVs placed," said Miani.
However, election officials could not locate the CM in any of the places mentioned by Miani.
The Congress candidate also complained of sporadic violence by NPP members who she alleged were trespassing, shouting slogans and threatening people of Ampati.
"They have created a mockery of the model code of conduct. I am still writing this complaint in the hope that law shall prevail. I would like to request for necessary action on the matter," she added.
TNT with inputs from The Telegraph, Nagaland Post