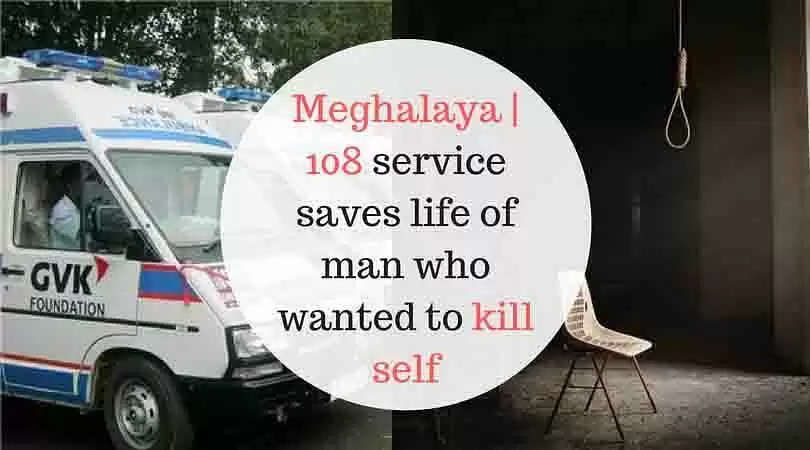 On Tuesday, the 108 Emergency Response Centre in Shillong received a call from a 27-year-old man at around 11.45pm saying, "Ma'am, I am calling from Laitkor near BSNL Quarters and I am going to commit suicide."

On hearing this, Thuester R. Marak, a response officer of the Emergency Response Centre who was on duty at the time, along with supervisor Eva Sawian, immediately started counselling the man and tried to convince him from taking any extreme measures.

The man also told them to not disconnect the call as he might harm himself stating that the reason he called 108 was because it gave him hope.

The response team immediately alerted the Madanriting police station in the city. Together, they engaged him in a conversation which lasted for about an hour and fifty minutes until the police rescued the man.

When probed, an official from the 108 Emergency Response Centre stated that the caller said his girlfriend had cheated on him after three years of being in a relationship. The girl, he said, was getting married to someone else.

"The caller said that his girlfriend is getting married to someone else and he cannot live without her," the official said.

"While asking him to calm down, the Emergency Response Centre team asked the caller who was with him at home. The caller said his father was out of station and only his mother was at home. The team then requested him to hand over the phone to his mother," the official added.

When the team asked the man to let them speak to his mother, she said that she was helpless as there was no male member at home to help her if her son starts harming himself.

The police were kept in a conference call as the 108 team probed for the location and landmark, which they later provided to the police.

The man was found to have had minor injuries on his neck and hands.

He was initially taken to Meghalaya Institute of Mental Health and Neurological Science  (MIMHANS) after which he was sent to Shillong civil hospital. He is presently in police custody.