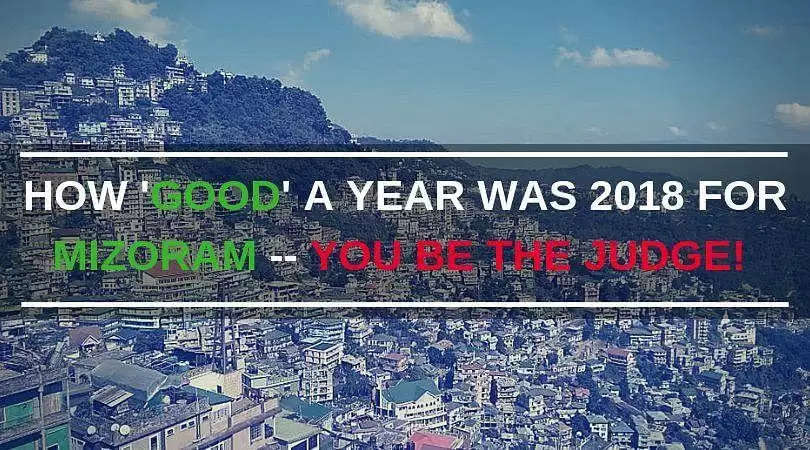 From the formation of a new Government to promises and initiatives to end the longstanding yet quiet conflicts, Mizoram has seen it all.

Before we go into the good and the bad things that took place during the past one year, let's take a look at some of the incidents which created sensational waves across the state, the region and the country.

What made headlines in Mizoram in 2018

After securing an absolute majority in the 40-member Mizoram Assembly, the MNF overthrew the Congress and returned to power after a decade. This is the third term for the MNF to be at the helms of affairs in the state and the third time that Zoramthanga is heading the state as its Chief Minister. Surprisingly, former CM, Lal Thanhawla suffered a humiliating defeat in recently concluded Assembly election. He lost both the seats he contested — Champhai South and Serchhip.

Soon after coming to power, the Zoramthanga government in Mizoram decided to declare dry days from Dec 21 to January 14 and shut all liquor shops operated by state agencies. The chief minister stated that the decision was a prelude to the total alcohol ban, which the MNF had promised to bring during the assembly polls.

A local church in Mizoram announced cash incentives to it's members who are ready to have a fourth child or even more. Cash incentives will go up accordingly starting from the fourth-born where the child will get 4000, 5th child will get 5000 and so on. In an effort to encourage the birth rate, the Mizoram baptist church from Lunglei's Bazar Veng also decided to bless new born babies with cash.

This initiative gained momentum when, in December, the Synod (the highest council) of the Mizoram Presbyterian Church also took the same decision to encourage more babies among its members. In the on-going 95th assembly of the Synod at Electric Veng Presbyterian Church in December passed the agenda to encourage Mizo couples to have more babies to check the dwindling Mizo population.

Meet Zoenpari, a young Mizo lady to join USAir Force and also becoming the first lady to complete training at the US AirForce. Zeonpari Chhakchhuak (19) is the daughter of Pu Dave Chhakchhuak and PiZothannguri Ralte residing in Chhinga Veng, Aizawl.

Meet A. Zakia, a prominent literari hailingfrom southern Mizoram' Siaha town has been selected for Padma Shri Award, oneof the highest civilian awards of the country, for his outstanding contributionto Mara literature and journalism. He is the first among the Mara tribe insouthern Mizoram to receive the award

Mizoram is among 19 states which has achieved100 per cent toilet construction coverage and has become Open Defecation Free(ODF). Out of total 8 districts, 4 districts are verified and declared as ODFdistricts, 2 districts are self declared and is under the process ofverification and another 2 districts are expected to be ODF by March 2018. 89.58%of the total population in 8 districts of Mizoram have individual householdlatrines, while 8137 number of toilets are yet to be constructed.

Two teenagers from Mizoram received the prestigious national bravery award on the occasion of Republic Day in New Delhi. Zonuntluanga,17 and F.Lalchhandama, 17 (posthumous) will receive the bravery awards from President Ram Nath Kovind, for exemplary display of courage.

Unbelievably, Mizoram and two othernorth-eastern states — Manipur and Meghalaya are amongst the states in thecountrywhere women-run micro, small and medium enterprises (MSMEs) will likelyovertake the usual testosterone-dominated business landscape, if they get therequired support. In fact, these three states lead the pack of top five statesin the country with the highest number of women enterprises.

Mizoram signed a peace agreement with Hmar rebel group, the Hmar Peoples Convention Democrats (HPCD) on Easter Monday in the month of April, in a hope to end the longstanding but rather quiet conflict. The accord is expected to end Hmar conflict but sceptics felt that a section of the HPCD which has a more extremist approach in their demand for an autonomous district council could spell future conflict.

In the country's sports arena, Mizo weightlifter Lalrinnunga made the state and country proud by winning gold at the Youth Olympic Games, in Buenos Aires. He won the medal in the men's 62kg category.This was India's first-ever gold medal at the Youth Olympics in 2018.

ALSO READ | From new Govt. to flash floods, Nagaland has seen it all in 2018

Health-wise, Mizoram suffered terribly at thehands of WW-II Scrub Typhus. As on January, at least 34 cases of scrub typhusinfection have been reported from Haulawng village in Mizoram's Lungleidistrict. Scrub typhus is a mite-borne disease caused by Orientia tsutsugamushi(formerly Rickettsia tsutsugamushi). Symptoms are fever, a primary lesion, amacular rash, and lymphadenopathy. In March, at least fourpeople died due to scrub typhus infection in Mizoram.

It was on 8 March and 10 March when around 100 students and local volunteers attempted to construct a wooden resting shed on the land. The same was met with opposition from across the border with Assam police and para-military forces refusing to let the students build the shed. This face-off went wrong giving rise to a chaotic situation with journalists facing the brunt of it all. The attack on journalists evoked criticisms from several quarters. A magisterial inquiry was also ordered into the alleged attack on journalists from Mizoram by the Assam Police during a border standoff with students of the Mizo Zirlai Pawl (MZP) at Zophai paddy field, 3 km from Bairabi town on the Mizoram-Assam border.

Before the polls were held in the state, the election commission of India decided to hold polling at Mamit district of Mizoram for Bru refugees living in Tripura. The place of voting for 11,232 Bru voters became the most controversial issue in the run up to the Mizoram Assembly polls, leading to replacement of the Chief Electoral Officer SB Shashank in less than two weeks ahead of the elections. Violence also erupted in Kolasib district of poll-bound Mizoram after the office of the Deputy Commissioner of the district came under attack from over 300 "angry" protesters who demanded the immediate cancellation of the names of Bru refugees from the electoral rolls.

With 1.19 per cent HIV positive cases amongpregnant women, Mizoram has recorded the highest rate of HIV among pregnantwomen. According to the Mizoram State Aids Control Society (MSACS) officials,the percentage of HIV prevalence among pregnant women in Mizoram is the highestin India, higher than the national average of 0.28 per cent. It was stated thatno other State has crossed one per cent. Five districts of Mizoram – Aizawl, Champhai, Kolasib, Lunglei andMamit – also figure in the top 20 "key population districts" or the districtswith highest population of high risk groups among the Northeastern States. Ofthese, Aizawl, Champhai and Kolasib are in the top three.

5. Mizoram faces the biggest climate threatout of 12 states in IHR

Mizoram has a horrible distinction of havingone of the highest rates of sexual offences against children in the country. Accordingto the National Crime Records Bureau (NCRB) that bases its statistics on the rateof cases under the Prevention of Child Sexual Offences (POCSO) Act , thenational crime rate of sexual abuse of children in 2015 was 3.3. Mizoramhowever, recorded a rate of 30.7 – the highest in the country-followed bySikkim (26.6).