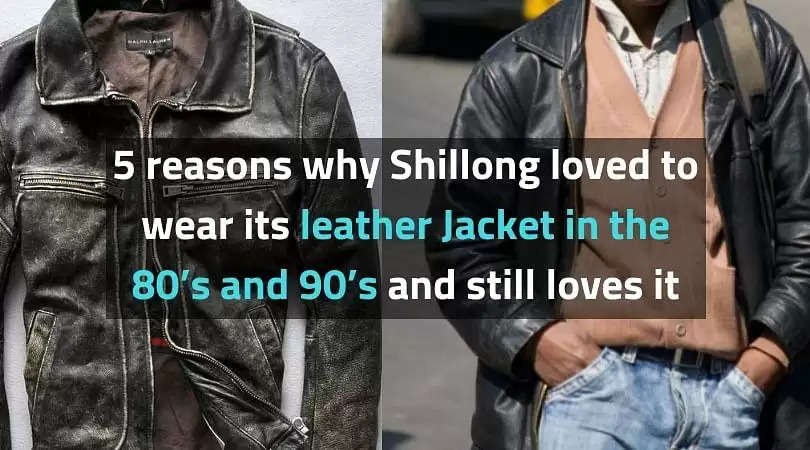 Shillong and its rendition with leather jackets is not only limited to the 80s and 90s but it continues even now. Here are 5 reasons why Shillong loved its leather Jacket in the 80's and 90's and still loves it.

** Needles to say its rock n roll , whether it is a fete in Malki or in Mawlai you will find leather jackets metal heads trying to create a mosh pit , the best way to identify them is a 1985 Bruce Dickenson multi zip short style jacket.The shops below Dreamland called Arora's made them just the way you like it. (We don't know if they still do it though!)

** My dad gifted me the jacket, usually it is the leather jackets which are passed on to the children and not property or stock bonds. The nostalgic memories of what your grandfather wore and then your father is a bittersweet one. With the jacket slightly torn and at times reeking of the alcohol of yester years.

** In the 90's, during the troubled times Leather Jacket was seen as a sign of power. Even today many Shillongites will claim that CRPF men would pick them up or question them if they were wearing a Leather Jacket. Sadly for the uniformed personnel when it came to Shillong everyone including the Home Minister of the state wore a Leather jacket.

** The Leather Jacket would give even the tiniest guy the sense of a macho look, if the school boy or a college boy wanted to roam the streets of Shillong after dark, a leather jacket was the perfect armory for them. Of course it helped that we could keep a quarter bottle of whiskey in one of the many 'Inside' pockets. If you had money then it could be from Glory's plaza and if money was an issue then some would buy a rexene jacket (OMG)

** Finally almost all guys thought that if they wore a leather jacket they would resemble a Tom Cruise in Top Gun/Axl Rose or a Slash. Their aim, no matter how much they denied it was to get the attention of the ladies . Not surprisingly, the Ladies were heavily into leather jackets too largely due to Madonna and Janet Jackson and Geena Davis (OMG).Well, that instant boost of confidence comes not by anything else but a leather jacket and who can deny this!