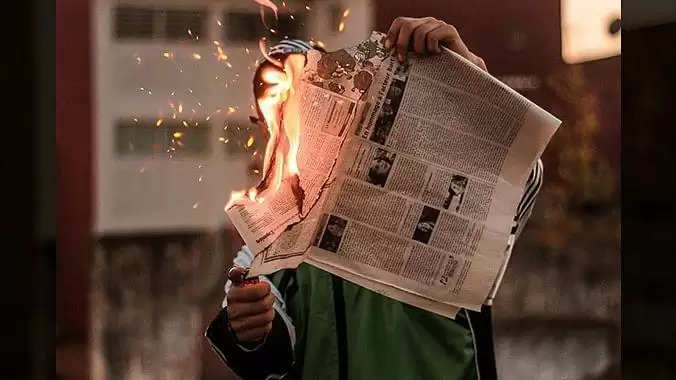 Nearly 6,000 copies of the vernacular newspaper ‘Pratibadi Kalam’ were destroyed at Udaipur in Gomati district of Tripura, on Saturday morning.

Pratibadi Kalam, Editor, Anol Roy Chowdhury, informed that around 6,000 copies of the newspaper which were dispatched for three districts in Tripura were snatched at Udaipur and half of them were burnt while the others were torn and thrown away.

Chowdhury suspects that the assault was due to a series of reports the newspaper published over the last three days on an alleged Rs 150-crore agriculture scam in which Agriculture Minister Pranajit Singha Roy’s name came up among others.

In his complaint, Roy Chowdhury alleged that 11 people forcefully unloaded the bundles of newspapers from a bus plying on the Agartala-Sabroom route and destroyed the copies. According to him, Raju Majumder led the group of miscreants.

Gomati District Superintendent of Police Lucky Chowhan said they filed a written complaint at Radhakishorepur police station at Udaipur and a probe is on to identify the culprits.

After this incident, Agartala Press Club’s outgoing secretary Pranab Sarkar, outgoing President Subal Kumar Dey along with other senior journalists and editors of top media houses of the state, met DIG Soumitra Dhar at the state police headquarters and demanded strict action on the issue.

BJP President Abhishek Debroy condemned the incident and categorically denied any involvement of BJP activists in this incident.

“Our party condemned such a shameful incident, and we believe that the police administration will take necessary action against the culprits. Our party respects the press as the fourth pillar of our constitution, and there is no involvement of our party activists in this incident. But we believe that this incident took place as a part of a larger conspiracy to create a rift between the government and media fraternity by few sections. The upcoming elections of the Agartala Press Club might also be a reason behind such conspiracy,” he added.

The Assembly of Journalists (AOJ), a forum of scribes of the state, has given the police 24 hours to nab the culprits, failing which they would hold a demonstration in front of the police headquarters.