Bru repatriation: Govt’s ‘apathy’ & Plight of Reang people; when will it end? 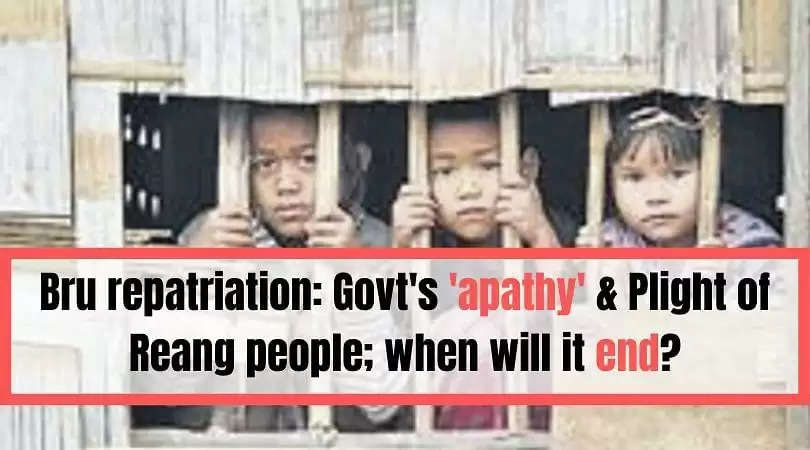 The repatriation of the Bru refugees has raised many an eyebrow as the alleged apathy of the government towards the plight of the Reang people has cost the lives of four people including two infants.

After the death of two Bru people including an infant, around 7,000 Bru refugees launched protests and demonstrated road blockade in Tripura, demanding that the Ministry of Home Affairs (MHA) resume the supply of rations to refugee camps.

Reportedly on Wednesday last, two people including an infant allegedly died of starvation due to the stoppage of rations and relief materials by the Centre for the Bru refugees living in seven relief camps in Tripura.

It was reported that today, two more people lost their lives and they have been identified as Bistirung (65) and Akosha (1) both from Naisingpara camp. The two others who died on Oct 31 have been identified as John Chongprengh (2) and Makoto Reang (60) also from Naisingpara camp. It was further informed that one 65 yrs old Ramjoy Reang collapsed and became unconscious on November 1.

However, the doctors have denied the allegations levelled by the Bru refugees clarifying that the infant died due to 'unknown disease'.

Since 1997 when the Bru refugees fled from neighbouring Mizoram due to ethnic clashes with the majority Mizos, six camps were setup in Kanchanpur and Panisagar subdivisions in Northern Tripura.

Since then MHA has been allocating separate funds to the Tripura government to supply monthly rations to the community. However the government has taken up several rounds of their repatriation to Mizoram since 2010, but over 30,000 Brus have stayed on in the camps demanding a better rehabilitation packages from the government.

Later in July 2018, prior to the assembly polls in Mizoram, an agreement was also signed with the Mizoram Bru Refugees Displaced Forum in New Delhi towards that end. However, on returning to the camps, the Forum walked out of the agreement as community members refused to agree to the terms mentioned in the rehabilitation package.

On October 3, the government restarted the repatriation process but the supply of rations had stopped from October 1.

While some families have moved back, most have not, demanding that the MHA first meet their demands, including the creation of an autonomous district council within Mizoram under the Sixth Schedule of the Constitution.

This demand has been rejected several times by the Mizoram government. On October 8, when vehicles sent by Mizoram government arrived at the camps to take back the refugees, women carrying black flags launched protests.

The president of Mizoram Bru Displaced People's Forum (MBDPF) A Sawibunga said, "There is no reservation for government jobs in Mizoram and no future for Bru community. We were forced to leave Mizoram. Some people went to Assam but were again shifted to Tripura. The government of Tripura made makeshift in seven relief camps of which three are in Panisagar Sub-division while rest of others in Kanchanpur Sub-division. From 1997 till date i.e. more than two decades we have met so many Ministers even with the Prime Minister of India and we have submitted so many memorandums, so many rounds of talks have been held in order to safeguard our problems. But till date no concrete solution has come out", he said.

He also said that the government of India and Mizoram have organized the repatriation process from October 01 last without rations and relief assistances. "People died of starvation in the camps due to starvation. Every section of the people of the Country will realize that this is unconstitutional and inhumane. How will this large number of people repatriate without foods in their stomach. Though we are willing to go back in Mizoram but without foods it's impossible. People are starving and we are bound to do this road block", he told this correspondent.

Royal scion, Pradyot Debbarma has expressed sadness over the apathy of the government towards the plight of the Brus.

"We have become Refugees in our own land and it hurts me that we are in this condition because we are not united . The situation of my BRU/Reang people is grave and I have already sent 1500 kilos of Rice,Dal and other food items as an emergency for them for the last two days and today more food items will be reaching them", he said while urging people to lend a helping hand to the Brus in this time of crisis.

Pradyot wants Brus to get land in Tripura

The royal scion is of the view of that if India can accept lakhs of people from Bangladesh through Citizenship Amendment Bill (CAB), "then why can't we Tiprasa people accommodate and accept our Reang/Bru people in Tripura from Mizoram? Many of them were displaced during the Dumbur Dam fiasco and migrated to present day Mizoram as well. If the government can consider giving 2700 acres of land for BSF firing Range then why not land for our displaced people?"

He said that the time has come to speak out while emphasising on the need to give Bru/Reang people land in Tripura . "Enough is enough," he said.