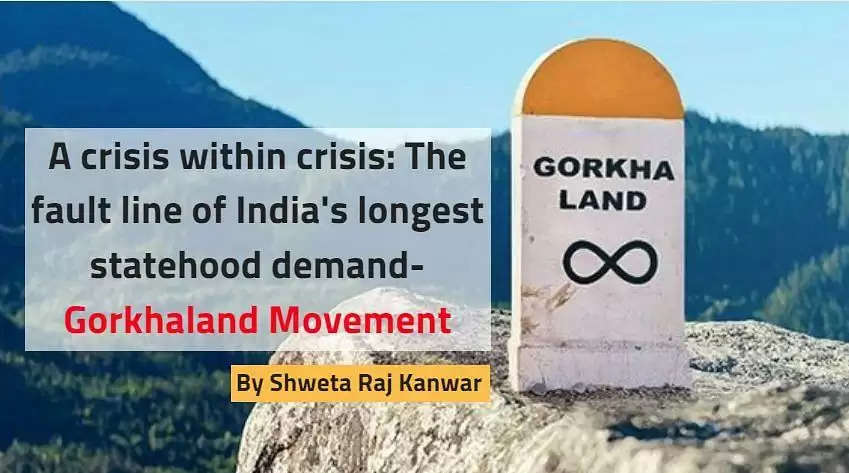 100 years and more, the longest statehood demand in India's history, the demand for Gorkhaland has, many times reached its peak; and yet has always come tumbling down. Time and again, the unfulfilled aspirations have been doused by temporary promises and in 2017, the 'Queen of Hills' was under siege as Gorkhas all around the world stood in unison against this incessant predicament of proving their identity as Indian citizens. Despite dating back to 1907, why is it that the demand for Gorkhaland has fallen into deaf ears? Why is it that despite agitations and protests, the issue still lays unresolved, pushed into the corner of nothingness- like a dormant volcano that erupts from time to time, only to be silenced again. What is it that reignites this movement time and again at regular intervals and leaves it without any solution?

The demand for a separate administrative unit in Darjeeling has existed since 1907, when the Hillmen's Association of Darjeeling submitted a memorandum to Minto-Morley Reforms demanding a separate administrative setup. Also, it may be mentioned that in 1947, the undivided Communist Party of India (CPI) submitted a memorandum to the Constituent Assembly demanding the formation of Gorkhasthan comprising Darjeeling District and Sikkim.

In the 1980s, under Gorkha National Liberation Front's (GNLF) Subhas Ghising, the movement reached its peak. 1986-88 were on of the most violent years of protest: approximately 1,200 people died. The agitation ultimately led to the establishment of a semi-autonomous body in 1988 called the Darjeeling Gorkha Hill Council (DGHC) to govern certain areas of Darjeeling district. Eventually, Ghising faded from the limelight and in 2008, the Gorkha Janmukti Morcha (GJM) began spearheading the movement. In 2011, GJM signed an agreement with the state and central governments for the formation of Gorkhaland Territorial Administration, another semi-autonomous body that replaced the DGHC in the Darjeeling hills.

The 2013 agitation was also one to remember wherein for the first time in 106 years, all the major political parties of the hills agreed to come together and jointly take the agitation forward. Even in 2017, the agitation bore no fruits. Protests first started on June 5, after the West Bengal government announced an intention that the Bengali language would be made mandatory in all schools across the state. People of Darjeeling and the adjoining areas who are predominantly Nepali speaking, saw this as an imposition of an alien culture upon them. Fuelled by the determination to preserve their own culture, identity and language, this protest soon turned into a full-fledged resurgence of the agitation for a separate state of Gorkhaland. July 30, 2017 saw the culmination of Gorkhas (and also some non-Gorkhas) all over the world taking part in a Global Rally for Gorkhaland. And as the Gorkha Global Rally completes a year in 2018, the issue still remains at large.

Where the problem lies

As is evident from history, agitations and semi-autonomous bodies have not been able to provide any respite to the Gorkhas' demand. What is clearly lacking here is an accountable and transparent leadership- one that inspires not only a group of people but that which motivates everyone to come along with him/her and move forward for a common cause with renewed strategies and fresh perspectives.

On these lines, Shankar Pandey, a lawyer from Shillong opines, "Talking about leadership, accountable and transparent leadership is the need of the hour. It may be recalled that during Subhash Ghishing's time, everybody looked up to him in the hope that he would give them Gorkhaland in a platter but the results proved otherwise. In 2017 again, it was the same state of affairs. However, a close look in the 2017 agitation will show a difference in strategic approach. It has been seen that people have learnt their lessons and GJM chief, Bimal Gurung was at the centre of the storm as people were on the lookout for accountability and transparency."

ALSO READ | On being an Indian Gorkhali or a Nepali in Northeast India- the identity crisis continues!

It has been seen time and again that the major problem with Gorkhaland movement is the attitude of shifting responsibilities to one person or a group of people who display a level of 'so-called' leadership which is not even visible to common masses. It is significant to realise that the onus of Gorkhaland falls upon each and every Gorkha residing in any part of the world. Another major problem with the Gorkhaland demand is the presence of power corridor- A sense of democracy needs to be instilled in the minds of leaders.

"Gorkhaland is purely a matter of safeguarding identity", Mr. Shankar adds. "When we compare the demand for Gorkhaland to those of Telangana, Uttarakhand and the likes, we see that the demand for these states was solely made from developmental point of view but this is definitely not the case with Gorkhaland. However, this does not mean that development is not a major factor in Darjeeling Hills, but identity is a primary force while all others feature subsequently", he states.

The problem of identity crisis has been haunting the Gorkhas in India since times immemorial. Hence, this is not a fight for a separation from India but a fight of Indians to retain who they are!

Mr. Shankar makes an important point when he says, "The issue of identity can only be solved by statehood and not by any form of autonomous body of governance that has been seen as a solution to douse previous agitations. This is an attempt to dilute the greater demand".

What is the solution?

"There is a need to set up a mass network of which each and every Gorkha can be part of a larger platform. The movement should not be confined to only the hills of Darjeeling but to all over India. Everybody should come together and take responsibility. There should be Gorkhaland campaigns and we should hold leadership accountable to us. There is no proper information dissemination. Knowledge is power and lack of knowledge makes the people and movement weak", says Mr. Shankar.

The need for alternate leadership with young people from all fronts of life is the need of the hour. Youth should take up responsibility to cover up the limitations in the movement. A fresh approach is needed. Darjeeling is lagging behind in every front in terms of overall development as compared to other states of West Bengal which all the more justifies the need for demand of separate statehood.

It is a test of endurance and this is not the time to fade away into oblivion. This is infact the only movement that says that Gorkhas want to be part of India with an identity of their own. It is not about 'Azaadi' here, it is about 'Identity' while upholding the saying 'Bharat Maata ki Jai!'

"Gorkhaland is not only about protests and agitation. It is time to understand that there are other more influential methods of demanding the same. It is high time we change our approach and work together smartly for a common cause. Even at the grassroot level, it is important for people to know what the movement is all about so that they can form opinions and work towards attainment of a larger cause. Ignorance in this case is definitely not bliss", he adds

Founding Vice Chancellor of Sikkim University, Mahendra P Lama, while addressing a gathering in Shillong, Meghalaya on the Gorkhaland movement last year also drew focus to an important point when he said, "The problem of Gorkhaland does not belong to only Darjeeling alone but it is a national issue. The identity problem with Indian Gorkhas has increased manifold as we do not have a proper state representation". Mr Lama was the pro vice chancellor of IGNOU and at the age of 45, he became the youngest vice chancellor of a central university in India.

He emphasises on the need to create a central committee to bring matters concerning all Gorkhas into the fray. For this, Mr. Lama stresses on the need for an organizational structure in the form of a central body that would overarch the national body and the inclusion of a national negotiating team as well. Following this, the next step would be to take the Gorkhaland issue to the National level with Parliamentary discussions on it. The issue should reach political parties, national civil society and other stakeholders including industrial and business houses.

He goes on to state that the orientation of the movement should undergo a major shift from emotional outpourings to more concrete discussions and debate. Tangible restructuring and reorientation of leadership pattern and political action should be carried out while also focusing more on central government to solve the issue rather than approaching the state government thereby confining the movement only to local fronts. It is important that a central committee should comprise of credible faces and influential minds so that the union government will take the plunge and be serious about negotiations.

Gaurav Lama, a supporter of Gorkhaland movement adds, "The movement in 2017 gained much more attraction due to social media. While it is good that the common man was honestly and strenuously involved, we must strive to strike deep into the BJP camp to make inroads. We must try to convince top BJP heads to push this matter forward.

The ruling government must prove to be more than just another power greedy party. They must come forth and stand by their promise of working on making Gorkhaland a reality. This can be achieved only if the senior BJP leaders are serious about Gorkhaland and if there are a bunch of people who shall talk to and remind the BJP senior hierarchy that they have their promises to keep."

As is rightly said, "We have to tread the unorthodox path. A desperate situation requires a desperate solution"-Mahendra P.Lama