The Long History of Naga Insurgency

The British first entered the Naga Hills in 1832 under an expedition led by Captain Francis Jenkins and Lieutenant Robert Boileau Pemberton. 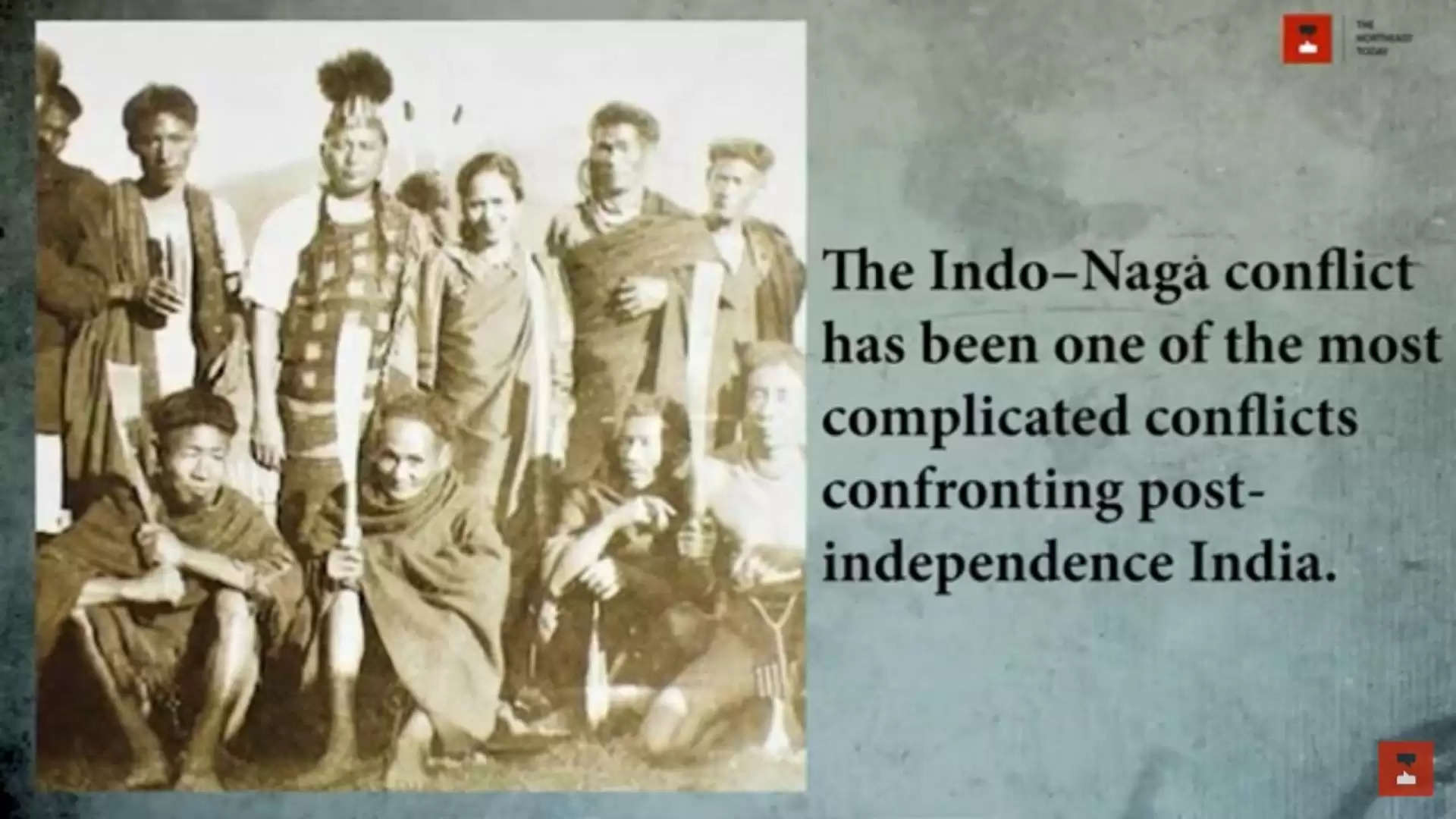 In the recent years, news agencies have mentioned the Nagaland conflict frequently, and have gained the attention of national and international media. Why is there a problem then in this North-eastern state?

Let us understand the problem in detail and tell you about age-old history of Naga Insurgency.

Nagaland continues to witness one of the longest and bloodiest standing insurgencies—one that has existed longer than the Kashmir insurgency. The political dispute has spanned over six decades, and to understand it, it is important to understand the ethnicity, culture, history, geography, and demography of the Naga tribes.

Nagaland is one of the smallest states in India, bordered by the state of Assam to the west, shares a very important border with Arunachal Pradesh to the north, and then Manipur to the south and Myanmar to the east. The Nagas accuse the British of having betrayed them, leaving their fate in the hands of India and Burma.

The state of Nagaland was divided into two administrative areas: one half under India and another under Burma, now known as Myanmar. This partition was so indiscriminate that the house of the Angh—the king—in Longwa village was said to be partitioned, with his bedroom in India and his kitchen in Burma.

Nagaland’s demand for permanent peace has shaped a common political and cultural identity. At first, the state was never part of British India, and Indian cultures and religions have been alien to them. It was only the British missionaries that introduced Christianity to a region that practiced a multitude of folk and animist religions genealogically distinct from the practices common to India.

THE HISTORY OF NAGAS

The British first entered the Naga Hills in 1832 under an expedition led by Captain Francis Jenkins and Lieutenant Robert Boileau Pemberton.

The Indo–Naga conflict has been one of the most complicated conflicts confronting post-independence India. During World War I, the British-India government sent about 2,000–3,000 Nagas as part of The Naga Labour Corps to work in trenches as laborers and porters. When these men returned, they arrived with an awareness of common identity and culture that eventually led to the establishment of The Naga Club in 1918 in Kohima.

Seventeen Naga tribes and twenty more sub-tribes united under the Naga National Council (NNC) in August 1947 to protest and demand an independent Nagaland. On August 14, 1947, the Nagas declared independence, and by 1954, the Indian Army moved into the Naga Hills.

Still deeply affected by the violent partition of its northern reaches, Indian leaders were against any further partitioning of the country, which compounded the plight of the Naga independence struggle. Nagaland finally became the sixteenth state of the Indian Union in 1963, before which it was a district of Assam.

Even within the Naga leadership, there was a difference in ideology among Angami Zapu Phizo, T. Sakhrie, and J. B. Jasokie. Phizo was a hardliner, while Sakhrie and Jasokie preferred a nonviolent resolution. In this intense struggle of ideas, the very ethos that Nagaland stood for was destroyed, spiraling into a conflict that has continued for over six decades—the longest independence movement of its kind in the Indian subcontinent.

On September 6, 1964, the Suspension of Operation agreement (AGSOP) was signed in the hopes of finally reaching a peaceful solution.

Rebel groups such as NNC, NFG, and NFA were declared “unlawful associations” under the Unlawful Activities (Prevention) Act of 1967 and banned by the Centre in 1972. The South Asia Terrorism Portal reports that security forces started an extensive counter-insurgency operation, worsening the conflict further.

On November 11, 1975, the Shillong Accord was signed between the Centre and a section of the NNC and the NFG. The agreement caused both groups to accept the Indian constitution and surrender their weapons.

However, a group of about 140 activists of the NNC, who were in China for training, rejected the Shillong Accord and formed another splinter organization, calling themselves the National Socialist Council of Nagaland (NSCN) in the Burma region in 1980. NSCN had gained immense power in the Northeast and became a dreaded organization. Internal conflicts among Naga tribes over regular violent clashes and killings split the NSCN further in 1988 into NSCN (IM) and NSCN (K). The NNC itself lost significance and the confidence of the people. Once Phizo died in London in 1991, NSCN (IM) became the “mother of all insurgencies.”

PANGS FOR A GREATER NAGALIM

The ultimate endeavor of the insurgencies has been to create a “Greater Nagalim” that includes all contiguous land, including Nagaland, where the Naga tribes are settled. This would include parts of Assam, Arunachal Pradesh, and Manipur in India, and large tracts of land in modern-day Myanmar. However, the idea of a “Greater Nagalim” has remained unpopular in these regions.

For the NSCN (IM), the Modi-led government continues from where Vajpayee left. While the current dispensation has attempted to continue resolution, the NSCN-IM holds fast to the belief that Nagaland has never been “Indian,” disagreeing with Nehru’s claims of inheritance of the Naga Hills from the British.

“Ami laga bhai aru boyni-khan. Aami Nagaland-te matiye karone besi khusi paise dei” (“My dear brothers and sisters. I am very happy to be amid you on the soil of Nagaland”).

At a public reception in Kohima in 2003, former Prime Minister Atal Bihari Vajpayee reiterated the “unique history” of the Nagas—this recognition has had a lasting impression on the minds of the people.

Yet, no such agreement was made with NSCN-K after it attacked the Indian Army in 2015. Two decades since, the Naga conflict remains unresolved, with no simple answers to what might finally bring peace to the people of Nagaland.

WHAT WAS THE ROLE OF THE BRITISHERS IN THE NAGA’S STRUGGLE FOR INDEPENDENCE, AND WHAT IS THE PRESENT STATE?

Dr Visier Sanyü (Historian): “In the agreement made with the Government of India, they recognized and acknowledged the “Unique History of the Nagas”. That means nothing unless it is explained historically because every other tribe or community has its own unique history, like the Khasis, Assamese, etc. What we learned is, Nagas throughout history never signed an agreement where they agreed to be a part of India or British India. So the History goes that in the year 1832, the British came across the Nagas. They were simple tribals; isolated, they didn’t have any contact with the outside world, including present India and Burma. Suddenly, from 1832 to 1879, there was War, on and off. What the Britishers call primitive expedition, was wars with several tribes over that period. In 1879 on November 29, there was a major battle called The Battle of Khonoma. By then, they had already taken over other areas like Timogidima where they had a base. Khonoma people were defeated on that date and 2000 soldiers came from Shillong and Imphal and Khonoma was a small village. It was said that it was the most serious battle ever fought on the hills, and it was harder than Afghanistan to conquer. In March 1880, they made a peace agreement with the British, and it was not a written treaty with the British. They were allowed to set up a police force, and the Britishers were allowed to stay. The British established the rule after Kohima became the capital city. The whole negotiation and rule were very unusual and there were only a few British families in Nagaland and it was run by a Deputy Commissioner and a few police officials who guarded the house. Then, in 1929, there was a commission called Simon Commission. This introduced the idea of reformation and the idea or possibility of the transmission of power and they came to Kohima. Naga Club submitted a memorandum that stated clearly, and this has become a historical document. We were never conquered by the outsiders and we were ruled by the Hindus or Muslims and you were the only ones that defeated us and if you go back to England, we will be independent again, as before.

Fast forward today, there are two groups, NPJ Naga Political Group and the other is called NSCM -IM and they have different views. The Indian Government clearly says that you cannot have a separate constitution and flag. The negotiations were made in August 2015 and now after so many years, there is still no final agreement because of the differences of ideologies. While India wants it to remain within the Indian Constitution, NSCM IM stresses that they share sovereignty and within the frame of the Agreement.

Views, thoughts, and opinions expressed belong solely to the author, and not necessarily to TNT-The Northeast Today