“So long as the AFSPA continues to exist, our lives, our land and our people will always be tormented by fear and uncertainty,” said Kegwayhun Tep 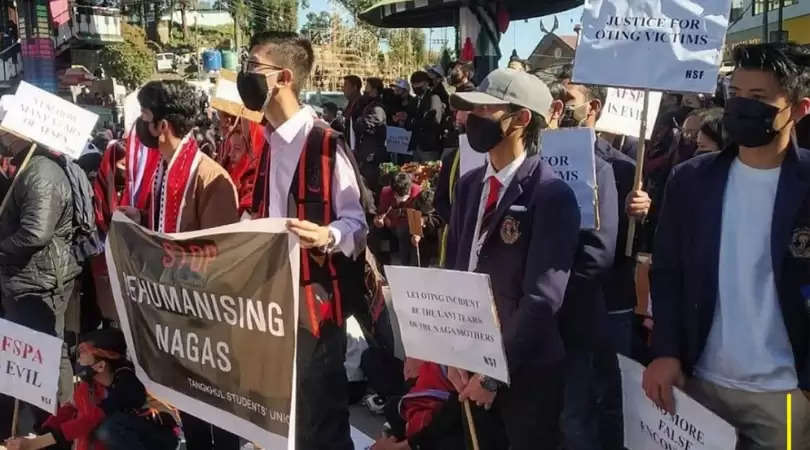 Naga Students Federation (NSF) held a mega rally in Kohima on December 17 to voice their opposition to the Armed Forces Special Powers Act (AFSPA) and demand its immediate repeal. It called for the draconian law to be repealed once and for all and human rights restored in the Naga homeland.

The rally was held against the backdrop of the Oting firing in Mon district, in which 14 civilians were killed by the security forces on December 4 and 5. Both students and the public attended the rally at Old MLA junction in large numbers, braving chilly weather conditions, brandishing placards – ‘Justice for Oting victims’, ‘No more false encounters’, ‘Stop dehumanising Nagas’ ‘AFSPA is evil’, etc.

A series of protests have been held throughout the state since the Oting killings in order to demand the removal of AFSPA from Nagaland and justice for the victims.

In his address, the NSF president, Kegwayhun Tep said, “So long as the AFSPA continues to exist, our lives, our land and our people will always be tormented by fear and uncertainty.”

He said there is no reason to label the entire Naga homeland within India as a ‘disturbed area’, adding that the repressive AFSPA was thrust upon the Naga people at a time when the Indo-Naga political dialogue, currently taking place at the level of the Prime Minister, is at a very crucial stage.

Tep went on to say that the prevailing law and order situation in the Naga-inhabited areas does not merit the application of the Act, which has only been used as a tool for psychological warfare against the Naga people.

“It is only because of AFSPA that the Indian armed forces continue to operate with impunity while forgetting all values and virtues that inhibit a sober soul,” he stated.

Tep demanded that the Government of India must immediately withdraw the “atrocious AFSPA” from the Naga homeland and repeal it without any exceptions.

“At this time of the year, where it was supposed to be the season of light, of hope, and healing, the Indian armed forces acting on behalf of the state have unleashed terror and fear in the hearts and minds of the peace-loving citizens in our Naga homeland,” he said

According to him, the people are utterly shocked, furious, grieved, and in disbelief at the extrajudicial and mindless act of terrorism committed by the armed forces of the Government of India against the peaceful civilians living in the Naga homeland.

Offering deepest condolences to the families of the deceased, the NSF asserted that their deaths will not be in vain.

The federation demanded that the Government of India establish a court-monitored committee, headed by a retired Supreme Court or High Court judge, to ensure that the Oting incidents are investigated fairly and impartially. It reiterated its stand that the Special Investigation Team set up by the Nagaland government will not do justice to the ‘willful acts’ of the Indian armed forces under the protection of the repressive AFSPA.

Additionally, the apex body of Naga students – NSF also demanded that the Government of India to acknowledge the failure of its intelligence agencies and publicly apologise to the Naga people for ‘furthering the subjugation of the Nagas by its policy of militarisation’.

“Justice should be delivered immediately to the victims of the gruesome Oting incidents and to all the pending cases related to the excesses committed by the Indian armed forces,” Tep said.

The NSF said it will not back down or be intimidated by such acts of terrorism and will not rest until justice is served and a logical conclusion is reached. It also sent a letter to Prime Minister Narendra Modi demanding immediate repeal of the AFSPA.

Narrating how the AFSPA in Nagaland led to killings and atrocities committed on the Naga people since 1960, the federation called for immediate justice for the Oting victims and for the rapid resolution of all pending cases related to excesses committed by the Indian armed forces upon the Nagas.

Also, the NSF advocated for the expediting of the Naga political solution process to reach an inclusive, honourable, and acceptable solution as soon as possible.