Nagaland’s Jesmina Zeliang adds another feather to her entrepreneurial cap 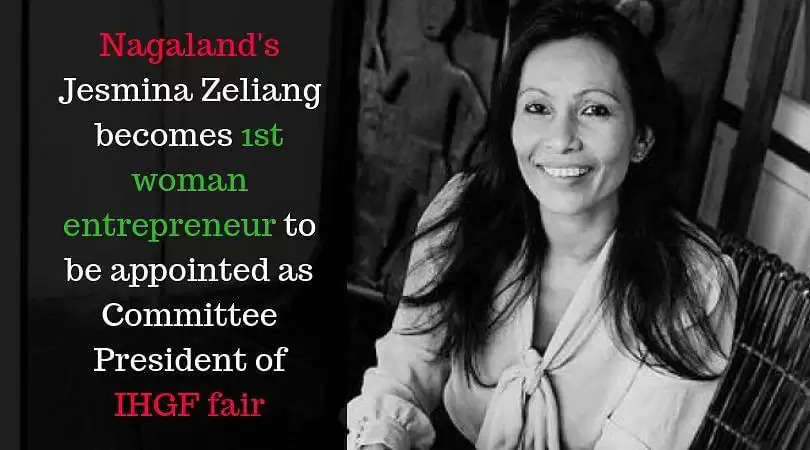 Nagaland's first woman entrepreneur, Jesmina Zeliang has been appointed as the President of the Reception-Committee of IHGF Delhi fair Oct' 2018, which is one of Asia's largest gifts & handicrafts fair.

She is also reported to be the first Indian woman entrepreneur to be appointed to this post.

Organised by Export Promotion Council for Handicrafts(EPCH), the IHGF Delhi Fair Autumn 2018 is Asia's "one stop sourcing event", since its inception in 1994 while providing extended business platform to small & medium exporters.

A role model for many women of the North east, Jesmina Zeliang, an entrepreneur who shaped her future by showcasing the wealth and richness of the Naga culture and its heirloom, has come a long way from being a card shop owner to a highly respected entrepreneur around the world.

Her ability to attract foreign investors has earned her not just a place amongst the powerful women in the country but put Naga and the NE culture in the cultural map of the world. Her products have drawn buyers from places like Jamaica, Egypt, besides the European countries.

In 2004, she was awarded the Kamla Devi Award for Crafts by the Crafts Council of India. In 2008, she was awarded the Woman Entrepreneurship Award by FLO, FICCI, North-East Chapter and in 2014, she received the coveted Governor's medal for contribution to the field of art and crafts.

She was recently re-elected as COA member for North East and a board member of all India Carpet Skill Industry.

Congratulations has poured in from different quarters of the society with Chief Minister, Neiphiu Rio being one of them.