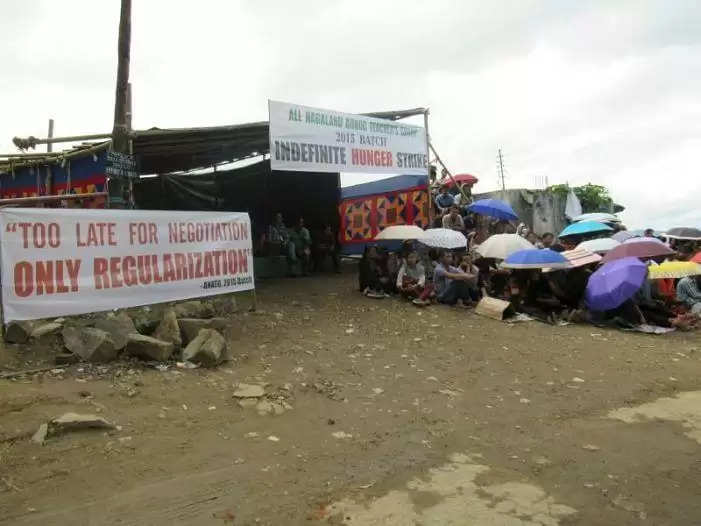 KOHIMA, June 30, 2018: During the ongoing hunder strike of the ANATG, one of the teachers, a mother of two protesting at the venue, collapsed due to a mild stroke. She was admitted in the ICU at Naga Hospital Authority Kohima (NHAK).

70 protesters are on a hunger dharna appealing the government to regularise their job. Expressing frustration over the silence of the government, a protestor said "Leaving aside all our family problems, we have come here hoping that our job will be regularised. Family members are hoping that we won't come back empty handed." Pregnant women, lactating mothers, parents and sole bread earners of families were seen at the protest outside the Directorate, while mentions were made about parents leaving aside their sick children to join their protest.

Many have travelled from remote districts and villages with no residence to put up. "Some of the men are putting up tarpaulin as a makeshift shelter," said a teacher. A teacher from Mon district expressed worry over the soaring debts many of the teachers are in. "With this mere salaries, we have to survive with loans. The loan is killing us," said the teacher adding that many of the protesters outside Kohima have travelled to the state capital to join the protest on borrowed money.

Another teacher mentioned, "We have been working for over 7 years. We have cleared the tests and interviews. As teachers under fixed salary, we have more responsibility to work harder than the other regular teachers. We bear the extra burden."

The misery increases for the ad hoc teachers posted in villages where there are no proper transportation or residence, while another teacher added, "Some of us from remote areas are compelled to teach six subjects."