RIIN is a sensitive issue and, there will be a lot of consultative meetings with all stakeholders before it is implemented, Government spokesperson Mmhonlumo Kikon said. 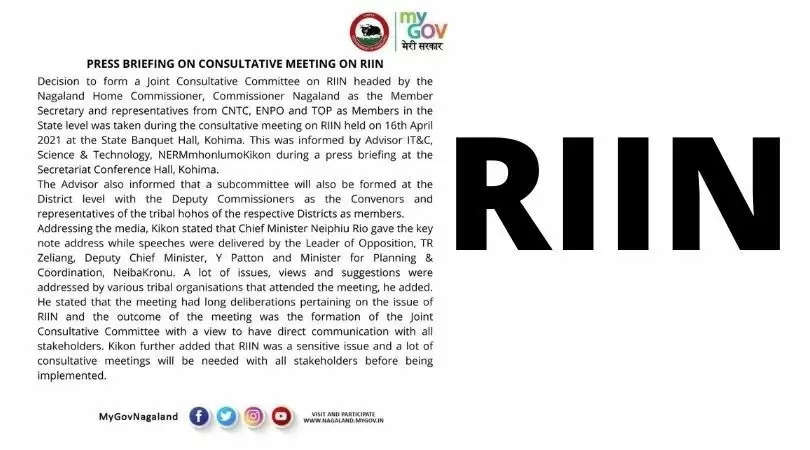 The consultative meeting between the Nagaland government and all the Tribal Hohos and civil organisations on Friday decided to form a Joint Consultative Committee on the Register of Indigenous Inhabitants of Nagaland (RIIN) to have direct communication with all stakeholders.

The meeting, held at the CM’s Residential Complex in Kohima on April 16, was also attended by Chief Minister Neiphiu Rio.

Government spokesperson Mmhonlumo Kikon said that they would also form a sub-committee at the district level, with the Deputy Commissioner as the Convenor and representatives of the tribal Hohos of the respective districts as members.

Various tribal organisations raised many issues, views and suggestions during the meeting, he said.

RIIN is a sensitive issue and, there will be a lot of consultative meetings with all stakeholders before it is implemented, Kikon added.

Nagaland Chief Minister Neiphiu Rio has appreciated the efforts of the Naga People’s Front (NPF), led by Opposition leader TR Zeliang, for 'vigorously' pursuing the matter with the ruling government, leaving aside their political differences.

"Nagaland came into being in pursuance of the 16th point agreement. The state has the legitimate rights to formulate its laws and regulations for the interest and protection of its citizens," Rio said.

Each tribe shall have its own Village, Regional and Tribal Council to deal with issues on customary laws and usages, he said, adding that such councils are legal and mandated by the Constitution.

On the Inner Line Permit (ILP) issue, Rio said the act is required in Dimapur, considering the difficulties and problems faced by the district and given the fact that it is a metropolitan city.

However, he mooted the idea of formulating a law that protects not only the nagas but citizens of other states as well.

“We cannot harass the citizens of any other Indian state while working on the system of RIIN or implementing the Act,” he clearly stated.

RIO STRESSES ON IDENTITY OF NAGAS OF NAGALAND

The chief minister said that the identification of indigenous people amongst the Nagas of Nagaland is not a problem, thanks to the involvement of the village council.

"But the identification of indigenous nagas in other states is a problem," he said.

He also cited the examples of Sikkim, Tripura and Assam, where the indigenous people have now become a minority in their own states.

Rio suggested the formation of a smaller group to work on the issue like setting up state and district-level committees comprising apex bodies like Eastern Nagaland Peoples Organisation (ENPO), Tenyimi People's Organisation (TPO) and Central Nagaland Tribes Council (CNTC) at the state level, and tribal Hohos and MLAs at the district level.

During the meeting, the union home minister had said that there cannot be any compromise on Constitution and the Flag, Zeliang said.

“Unless the Naga political issue is solved, (for) the Naga society to move ahead for progress and development is not possible," Zeliang quoted Shah.

“It is the ardent prayer and desire of the NPF party to work together with the government of the day when it comes to Naga political issues,” he said.

Meanwhile, Deputy Chief Minister Y. Patton opined that RIIN is to protect the rights and privileges of indigenous inhabitants of Nagaland.

During the Consultative meeting, the tribal Hohos took a collective decision to go for RIIN but, insisted that Banuo Z. Jamir’s report should be made known to the public before implementation.