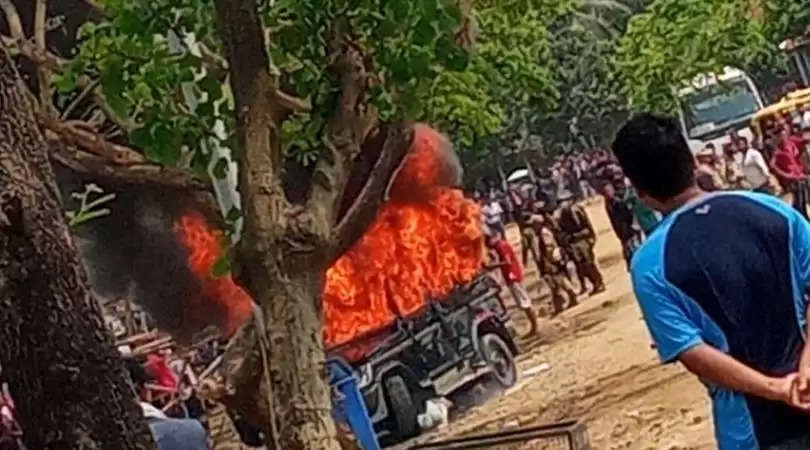 On the second day of the indefinite bandh, the situation in Jalukie town took a violent turn. There were reports of vehicles being burnt and damaged.

The bandh was called to protest against the "inability" of the government to fulfil their two-charter of demands concerning the killing of three persons by armed miscreants in Lamhainandi village under the Peren district on March 22.

The two demands include identifying and punishing the culprits as per the law and suspending the commander who was posted on the day of the incident.

"However, to date, the government has not taken any action. It is an insult to the whole of the Nagas,” UZYF president John said.

When asked about the stray incidents across Jalukie, the youth leader justified that the district administration was already made aware of the bandh.

"We had already notified the district administration on the indefinite bandh and, that includes the banning of government vehicles in the Peren district and, the Deputy Commissioner had assured for full cooperation," he said.

“The vehicle of Jalukie ADC was parked in the middle of the town, and that is not an official duty. The ADC was not in the vehicle but only his driver,” John said.

Earlier, Nagaland police arrested four persons in connection with the killing of the Lamhainandi shooting incident.

Reacting to this, John said that the four persons arrested in connection with the case were only suspects.

The federation has no other demands apart from the two points in the memorandum, he added.

He further said that the indefinite bandh would continue till justice is served and, till the time, the state government fulfils its demands.

“It depends on how the government responds to us. Until and unless justice is delivered, we will not stop our agitation,” John said.

Because of the prevailing situation in Peren, the Deputy Commissioner has issued an order imposing 144 CrPC under Jalukie town and adjoining areas.

The areas include Peren District HQ/Kejanglwa-Jalukie Peren tri-junction to Mhainamtsi-Dimapur Kohima tri-junction and, from Samziuram village gate towards Jalukie town.