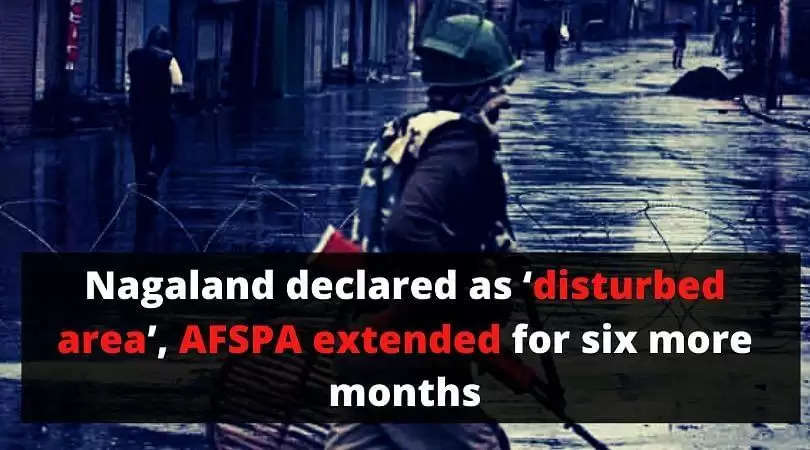 The operation of the Armed Forces Special Powers Act (AFSPA) has been extended for another six months in Nagaland with effect from 30th June 2020 after being declared a 'disturbed area' by the Central Government.

In a notification, the Home Ministry said the central government is of the opinion that the area comprising the whole of Nagaland is in such a disturbed and dangerous condition that the use of armed forces in aid of the civil power is necessary.

The Home Ministry said, "Now, therefore, in the exercise of the powers conferred by Section 3 of the Armed Forces (Special Powers) Act, 1958 (No. 28 of 1958), the central government hereby declares that whole of the said State to be a 'disturbed area' for a period of six months with effect from 30th June 2020 for the purpose of that Act."

Nagaland has been under the coverage of the AFSPA for almost six decades and it was not withdrawn even after a framework agreement was signed on August 3, 2015, by Naga insurgent group National Socialist Council of Nagaland (Isak Muivah) General Secretary Thuingaleng Muivah and Centre's interlocutor, RN Ravi in the presence of Prime Minister, Narendra Modi.

The decision to maintain the status quo in Nagaland regarding coverage of AFSPA, a law slammed by many civil society groups as "draconian", came amidst reports of deteriorating law and order situation there.

The AFSPA gives the armed forces sweeping powers to search and arrest, and to open fire if they deem it necessary for "the maintenance of public order".