When it comes to music, our hills will always stay alive with the sound of music – Paul Lyngdoh

Speaking at a small gathering to release his album on Saturday evening – The Search, Lyngdoh who is currently a Member of District Council of the Khasi Hills Autonomous District Council (KHADC) felt that music and sports are other core strengths of the state apart from tourism. 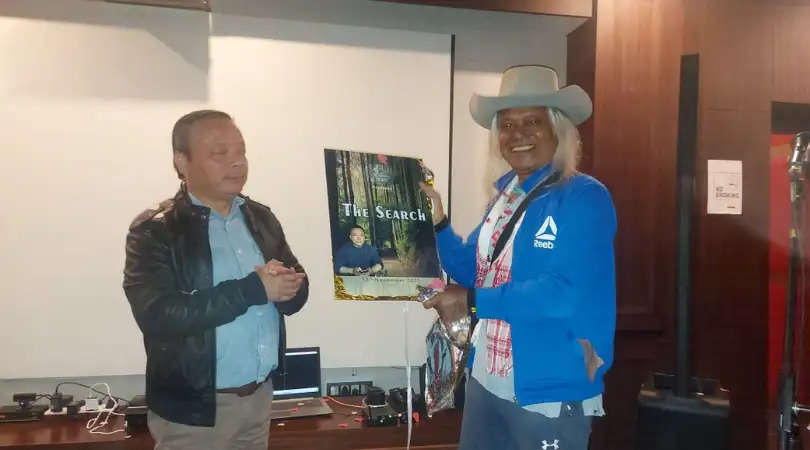 Forty-nine years old politician, Paul Lyngdoh is optimistic that people from other parts of the world can tap into the tunes from the quaint hills of Meghalaya in the same way that Shillong sways to the tunes of Jamaica’s Bob Marley.

Speaking at a small gathering to release his album on Saturday evening – The Search, Lyngdoh who is currently a Member of District Council of the Khasi Hills Autonomous District Council (KHADC) felt that music and sports are other core strengths of the state apart from tourism.

He said, “Today, we can sell music as one of our core strengths to the rest of the world and if Jamaica and Bob Marley could reach the hills of Meghalaya and we have a Marley fest every year, why can’t we think of taking Shillong’s music to the rest of the world. Something that looks like Shillong Chamber Choir and Summersalt are doing today and which should go from strength to strength.”

Without a doubt, Shillong loves Jamaican singer Bob Marley where in the pre-pandemic days, an annual Bob Marley tribute fest would be held. Besides that most of the hip and happening eateries have their walls adorned with quotes and pictures of the “Buffalo soldier”.

Lyngdoh shared his interesting journey as a singer. He started off as a songwriter, and many were Khasi songs during his tenure as Khasi Students’ Union (KSU) leader, some of the songs are found in “Na thwei ka dohnud” album and others.

The songs in the album “The search” were composed by him taking maximum advantage of the pandemic situation in the last one and half year and also few songs written in the pre-pandemic which he had written with John Daniel who is currently based in Bangalore.

For Lyngdoh, it was quite a transformation from a songwriter to becoming a singer-songwriter as he puts it – “Somebody who not only writes but vocalises his own stuff.”

“Over the years, it was challenge to begin with because I have always believed that singers have to have the best pitch and have to sound perfect musically and they have to be flawless,” he said.

In his new-found inspiration to be a singer, he came across few more musicians and he subsequently stepped into the recording studios.

Together, the team of singers recorded as many as 18 songs and 9 of those will be part of the first leg of album–the first part is called the Search. The second part is called - the journey.

“Two of these themes summarises the meaning of life- life as a search for meaning, for identity, for self-discovery while the journey which means that life is an ever ongoing journey towards things which is way beyond the horizons,” Lyngdoh said.

Lyngdoh who was a former Urban Affairs Minister said that he first fell in love with music while he heard the word ‘politics’ not until High School.

He said, “How is it that politicians can also be musicians?  I first fell in love with music before I heard the word politics. When we went to school, we would stop by and take the risk of being late just to hear the few lines from The Beatles or Eagles.”

It may be recalled that the senior UDP leader Paul Lyngdoh released a poetry collection “a return to poetry” in the year 2018.

Some veteran musicians like Andrew Thabah, Lou Majaw, Rudy Wallang, and many others were present at the launch event.

Lyngdoh’s young son was also present and looked intently at his father as he shared anecdotes of his journey as a songwriter.

Meanwhile, the video of the song “Grounded” was also screened. Starting off on a jazzy note, it is a song on the pandemic that has hit globally since the end of the year 2019.

Some lines from the song “you try to make some sense/ has the world come to the end?/ as we watch lives being grounded/careers and projects pounded/we find ourselves in the debris of this wave/ for too long we’ve been cocooned/on our islands being marooned/inflicting and being inflicted wounds.”