The party had earlier named Eugeneson Lyngdoh, a football icon, as its candidate for retaining the Mawphlang seat. 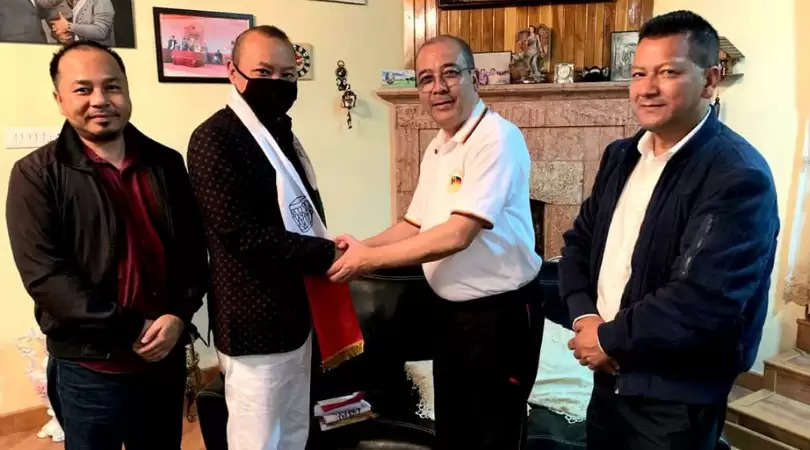 The United Democratic Party (UDP) on Wednesday announced its candidate for bye-election to the Rajabala Assembly seat and said it will not field any candidate from Mawryngkneng, but will extend full support to National People's Party (NPP) candidate Pyniaid Sing Syiem for the seat in the upcoming bye-polls.

Addressing the press, UDP chief and Assembly Speaker, Metbah Lyngdoh, said that Ashahel D Shira will contest from the Rajabala seat in the party’s ticket.

"We feel our official candidate Shira will definitely win this election. The decision is based on the feedback and inputs we got from the ground," said Lyngdoh.

Shira is the sitting member of Garo Hills Autonomous District Council (GHADC) from the Batabari constituency and was the former Rajabala legislator during 2013-2018. He quit Congress to join the UDP ahead of the bye-poll. Shira was welcomed to the party on Tuesday night.

UDP, however, has decided not to field any candidate from the Mawryngkneng constituency, informed Lyngdoh.

"The circle leaders of the party have decided not to field any candidate from Mawryngkneng. Instead, will extend our support to Pyniaid Sing Syiem, who is the sitting MDC and NPP candidate, contesting from the same constituency," Lyngdoh said.

The party had earlier named Eugeneson Lyngdoh, a football icon, as its candidate for retaining the Mawphlang seat, which was represented by its associate member, independent MLA, and Eugeneson’s father, (L) Syntar Klas Sunn.

Lyngdoh said that the decision pertaining to Mawryngkneng and Mawphlang was taken collectively at the party level with the consent of the Regional Democratic Alliance (RDA) partner namely the Hill State People's Party (HSPDP). He added that the HSPDP has also endorsed the candidatures for the two constituencies - Mawphlang and Rajabala.

Expressing confidence that the party will win from both the seats, the UDP president said that the party has done proper analysis for the Rajabala constituency. Likewise, Metbah also expressed confidence in Eugeneson saying that he will sail through from the Mawphlang seat.

On NPP's decision to field sitting MDC from Mawphlang, Lamphrang Blah, the UDP chief said that Eugeneson will win from Mawphlang, but “the UDP will also work hard to give a befitting challenge,” said Metbah.