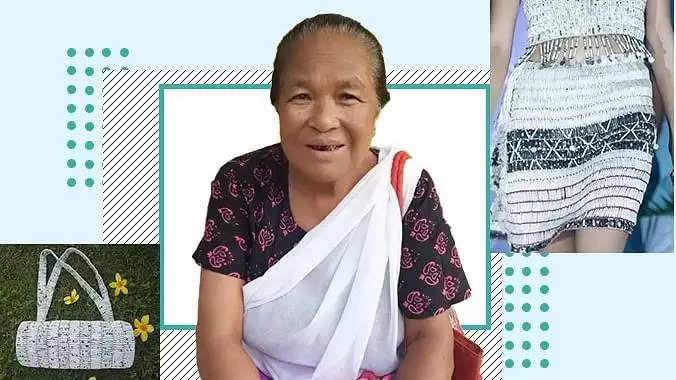 For 72-year old Ambi Cryspil, the taste of entrepreneurial success became riper with age. “It’s never too late to start something that you are passionate about because it always brings you joy and satisfaction in life,” she says.

Hailing from Modynagar, Tura, Meghalaya, Cryspil started her venture of recycling waste material, and handcrafting it into ethnically inspired accessories, at the age of 50. Her aim is to revive the rich culture of the A’chik (‘people of hills’ in Garo language) by promoting sustainable fashion such as the ‘Ganding-Chinding’ (traditional Garo attire).

Cryspil was born in Derek, Assam, before permanently settling in Tura where she pursued her studies in Christian Girls School. Later she got married but her husband passed away in 1984. This was when things became difficult for her.

“If you are in pursuit of your dreams and happiness but are having a tough time, don’t give up on your dreams,” says Ambi Cryspil, who tried engaging herself in various businesses after the demise of her husband.

Soon she founded her own business, Cryspil’s Creations, where she designed products like eco-friendly, handcrafted, affordable and non-conventionally designed accessories.

Her first major breakthrough was when she was approached by Tourism Department for making kadesil and kakam (Garo traditional attires), required for Wangala dance during the 2007 Independence Day Celebration in New Delhi.

Subsequently, she also received the opportunity to exhibit her design in an event at Asian Confluence, Shillong, in 2016 and in 2018, she displayed her designs at Fashion Mania in Tura.

She is also a recipient of the Award of Excellence for Waste Management and Innovation, which was presented to her during the Independence Day Celebration in 2018 by the Deputy Commissioner of West Garo Hills.

In 2019, she was the oldest winner among the top 25 of Chief Minister’s E-Champion and ever since, she has been receiving assistance and mentoring from Promotion and Incubation of Market-Driven Enterprise (PRIME) (a Government of Meghalaya initiative under the Planning Department), Meghalaya Basin Management Agency (MBMA) and Meghalaya Institute of Entrepreneurship (MIE) in collaboration with Indian Institute of Management Calcutta Innovation (IIMCIP).

In her message to all the entrepreneurs of Meghalaya, she believes that striving for goals with passion, no matter what the age, will ultimately reap fruits.

(Special thanks to Cryspil’s granddaughter Balsara Sangma for the inputs)