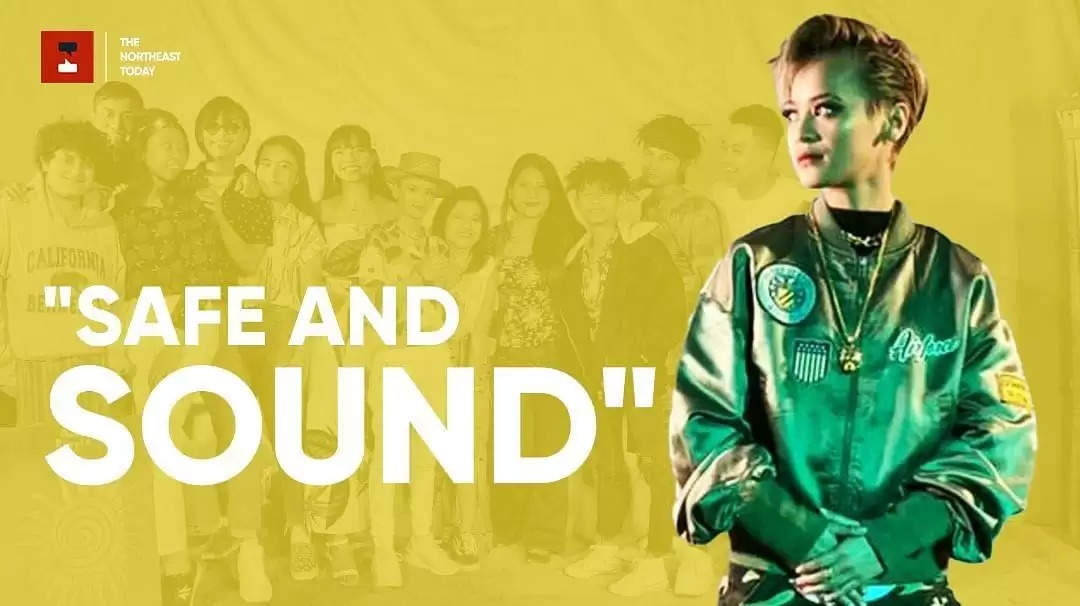 With a duration of 5:05 minutes, Jessie Lyngdoh's 'Safe and Sound' made its digital debut on Sunday, March 21.

'Safe and Sound' is a bilingual song sung in English and the local language, Khasi.

Speaking to TNT-The Northeast Today, Jessie described the song as a narrative about a difficult scenario in love engagements where two people long for each other while having long-existing relationships.

"Instead of risking destruction for both situations, they would rather treasure and value the higher level of love of human relationships than risking any temporary relationship," she said.

Performed by Jessie Lyngdoh, Adoryllene Sawian, Alexandria Kharshiing and Gino Thangkhiew, 'Safe and Sound' was produced by B4ndit aka Ban Lyngdoh, with Dapalei Stacy Warjri, credited as the choreographer for the music video.

The team aimed to incorporate new and old artistes from Meghalaya who excelled in different genres.

They mentioned that the music video was made in collaboration with talented young upcoming dancers, cinematographers, vloggers and set designers with an "end goal of promoting each member of the team".

With a rise of development in various fields, the 'Safe and Sound' production team intends to create an intensified ever-growing scene in the music industry.

"We aim to inculcate positive energy towards our wide audience and strengthen our local language in the track, but mostly help each other grow and expand from our existing strengths in the name of music,” said the production team.

Adoryllene aka Lily, who collaborated with Jessie for the very first time, also praised the team.

"It is very exciting to have collaborated with Jessie, Alexandria and Gino. It is a fun song with a summer-spring theme to the music video. I truly enjoyed myself, and everybody needs to watch out for this music video," she said.

"It was an immense pleasure to have choreographed such an amazing song, especially because of the kids who were involved in it. It is truly wonderful to see so much potential in today’s youth. They need to be given a platform to showcase whatever they are blessed with. It was also exciting because there were different seasons in the songs that had to go along with the costumes and choreography, so I had to be creative," choreographer Dapalei Stacy Warjri said.

Jessie Lyngdoh, an artiste known for her vibrant music videos, always puts in a lot of effort in deciding the perfect theme.

This time, she got one of the best people to design it for her. Jhansy G.D Marak designed and conceptualised the theme of the music video 'Safe and Sound'.

The set design stage included seven scenes in an enclosed room like a mise en scene separated by walls and doors. "The video is made up of four individual scenes that stem down to the personality of each artiste accordingly and three scenes depicting 'Spring', 'Summer' and 'Tropical' to show the different seasons that end with the main genre derived from the song," the team added.

According to Jessie, most music videos based in Shillong are travel or landscapes centric.

So, the team wanted to stress more on creativity by highlighting the set and props as it could help produce "more scope and imaginative ideas for the future in Shillong when creating a music video".

"As for the artistes, one of them being Alexandria Kharshiing, who is a new face in the music scene, has never pushed her limits towards music even though music has always been in her veins," Jessie said.

When asked about her purpose, Jessie said, "My purpose is to push people towards their goal even if they encounter a situation they fear the most. From vision to execution, I stand by them. I believe that anything is possible as long as we know that there is no limitation for a human being".

October 2020 witnessed Jessie Lyngdoh's single, 'Kynmo' (‘remember’ in English), which created waves on social media. Not only did the music video for the song garner 4.7 million views on YouTube, but it also received much appreciation from music lovers all across the state and beyond.

So the question now arises, what does 'Safe and Sound' have in store for us?

Go figure it out by watching the music video of 'Safe and Sound' which is here to "paint the town".