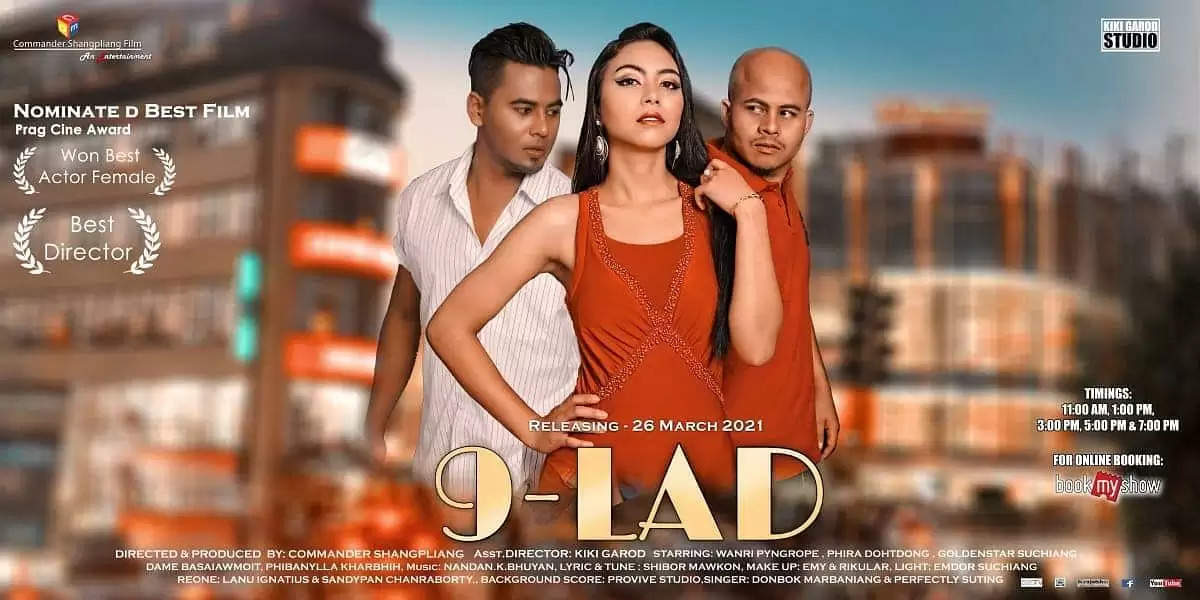 One of Meghalaya's most anticipated movies, 9-Lad was formally released on March 26 at a local cinema hall in Shillong.

The movie is named after Khyndai Lad in Police Bazaar - a commercial hub in Shillong city.

It was the second time the film was screened for a public audience. It made its debut in theatres on February 28, 2020, but was removed, on account of the COVID-19 pandemic.

Wanri Pyngrope, who won best actor (female) at the Prag Cine Award, was singled out as the movie's main draw, and was praised for her performance which left the audience awe-struck.

The movie deals with the sensitive topic of "flesh trade" and the factors that compel women to take up a life of prostitution. It shows how the constant struggle for money makes a person take the path from which they may not be able to return.

The cruel circumstances in her life forced the protagonist - Darica (character) to make the ultimate decision between her morality and the necessity of her family.

"I felt that Darica, as a character is a strong woman and depicts the true meaning of a mother's sacrifice and unconditional love," Pyngrope said.

"I knew this (movie) would raise some eyebrows but, at the same time, I had to do it. This movie is about raising awareness; about humanity, about people who get stuck in situations they never wanted to be in," she added.

Nonetheless, it does have "a happy ending and a message to all that no matter how hard your situation may be, things do get better."

The movie received mixed reactions from its viewers. While most praised the movie, few were left with certain doubts.

"It was a thought-provoking movie and, it affected me on a personal level," said one viewer.

"It was a modern and advanced film, and I'm looking forward to more works by this director. I would rate it a 9 out of 10," added another.

However, another viewer pointed out that the movie was 'too short' and, there were a few scenes that lack clarity.

"It would have been answered if the other characters had more screen timing," the viewer added.

Speaking to TNT-The Northeast Today, the director of the movie, Commander Shangpliang, who had earlier made a movie on HIV/AIDS, said he wanted to touch a topic that would relate to a social cause.

"This is a sensitive issue that people generally do not discuss, but it does not mean that it is not happening. I did thorough research before taking up this project and realised that it needed more exposure; hence, I made this movie to create awareness," Shangpliang explained.

When asked about his next project, Shangplaing mentioned that his next movie would revolve around political issues, and "comedy" will be an added factor as 9-Lad may have lacked it.

Phira Dohtdong, who enacted the role of an alcoholic and an abusive husband, mentioned that the character was not much of "a challenge, but more of an experience".

"The appearance of the movie is such that people would assume it to be R-rated, but it is a movie that can be watched even with family," he added.

Goldenstar Suchiang, whose sudden change in character left the audience stunned, said, "I'm not used to portraying such characters. From comic to negative role, it was surely a difficult and a huge jump for me."

"There were certain scenes in the movie which made me uncomfortable but, I took it as a challenge and gave my best," he added.

9-Lad revolves around the heart of the city - 'Police Bazaar' and the buzzing activities often considered taboo. It emphasises the power of forgiveness and love.

It stresses how love and forgiveness can help one bring about a change in their life, provided they have the willpower and determination to do it.