As per the report, the state is among the worst-performing states in the Northeast and is staring at a “developmental abyss” of hunger, unemployment, poverty, food insecurity and malnutrition. 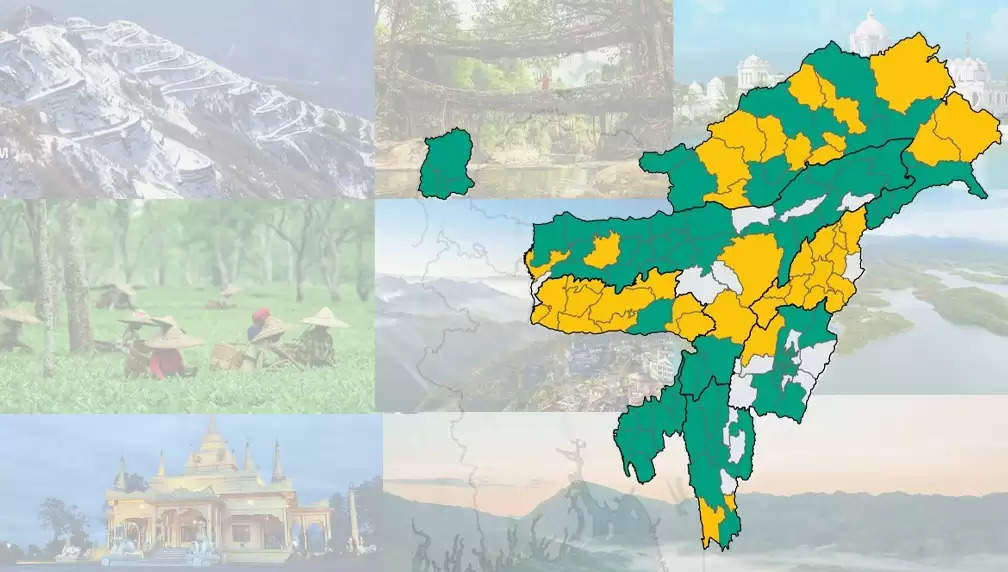 As per the report, the state is among the worst-performing states in the Northeast and is staring at a “developmental abyss” of hunger, unemployment, poverty, food insecurity and malnutrition.

Data from the report stated that Meghalaya scored between 56.87 and 66.27. Out of the 11 districts in the state, while East Khasi Hills scored the highest (66.27), securing an overall rank of 57, North Garo Hills was placed in the bottom at 98 with a score of 56.87. The states with the highest scores are Sikkim and Tripura.

For the composite score and ranking of districts, the SDG report considered a total of 103 districts in the NER, of which 64 districts belonged to the “Front Runner” category and the rest 39 districts were categorised in the “Performer” category.

A combined effort by NITI Aayog and the Ministry of DoNER, with technical support from United Nations Development Programme, it measures the district-wise performance of the eight states of Northeast India, namely, Arunachal Pradesh, Assam, Manipur, Meghalaya, Mizoram, Nagaland, Sikkim and Tripura, in achieving various social, economic and environmental targets set as part of the SDGs and publishes the targets and ranks of these districts based on the same. 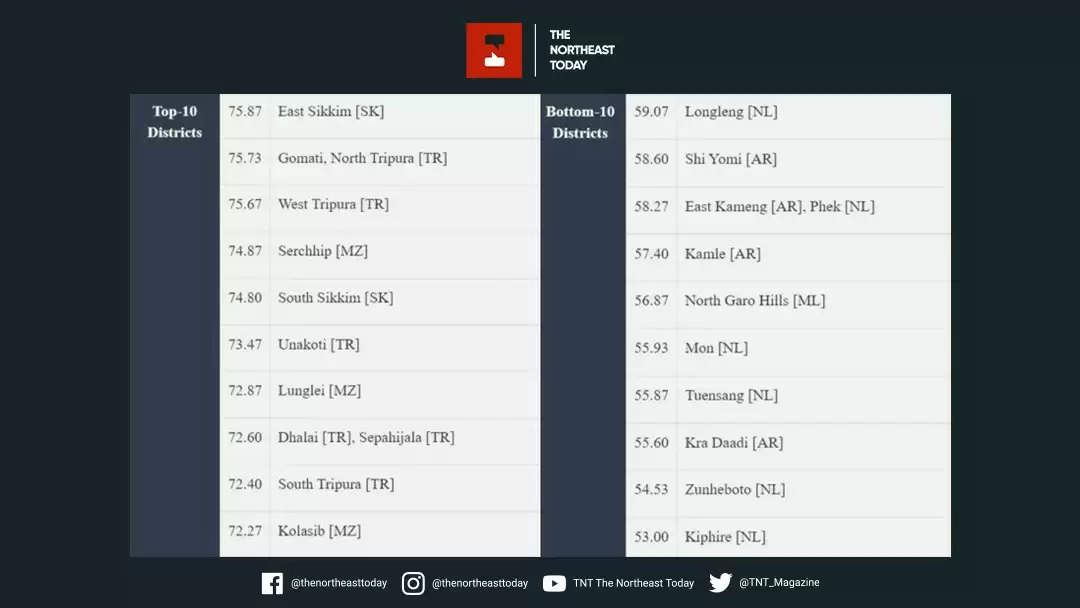 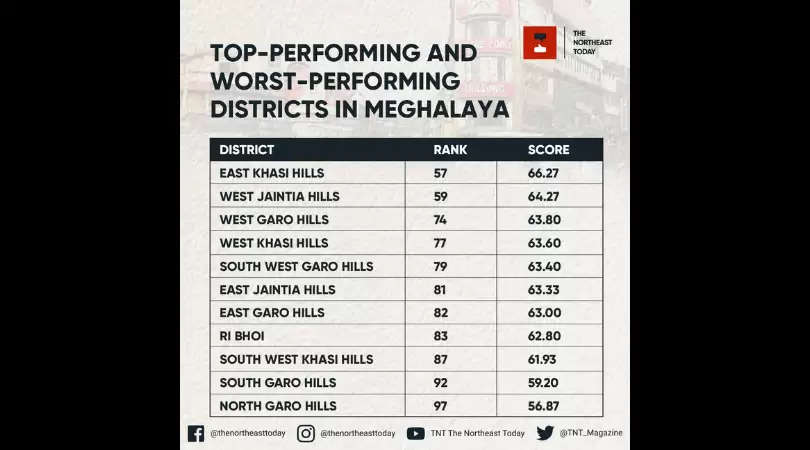 Reacting to the index report, Thma U Rangli Juki (TUR) said, “The report highlights the glaring failures in terms of social development. If development were a ‘Talent Contest’, Meghalaya would have been disqualified in the first round itself.” TUR feared that Meghalaya is going to be caught in a vicious cycle of poverty, hunger and unemployment if these issues pertaining to the state’s development remain unaddressed.

Dr Prasenjit Biswas, an associate professor at the Department of Philosophy, North Eastern Hill University (NEHU), observed that Meghalaya's SDG performance depends on its socio-economic ethos, which is not understood by those who do an outcome-based evaluation.

“In a predominantly hilly terrain with shifting cultivation as the main source of livelihood for common tribal clans, indicators often do not add up, as it happens in case of service sector dominated states,” he said, adding that SDG becomes only a part of governmental objectives without being grounded in the social reality of Meghalaya.

While maintaining that the state government has taken positive efforts in supporting the rural masses and opened up opportunities for the institutional role and gainful participation, Biswas said that this, however, cannot link the dots in the institutional framework, as policies do not establish correlations between structural factors and institutional targets.

“Hence, SDG as the right outcome is deferred and it would need another period of closer implementation,” he added.

Meanwhile, Dr Benjamin F. Lyngdoh, an assistant professor at the Tourism Hotel Management department, NEHU, felt that the indicators are basically a “failure” of political leadership. “The focus is more on holding on to the government or toppling the government rather than to work for development,” he said, adding that as a people, “we also share the blame.”

“We must not just look at the government; but in our own individual capacities, we must work and do our own part. However, this is missing. For the people who are in positions of power and authority, they must do justice to their positions,” he added.