Meghalaya: Surprise raids lead to shut down of 6 illegal saw mills near Phulbari 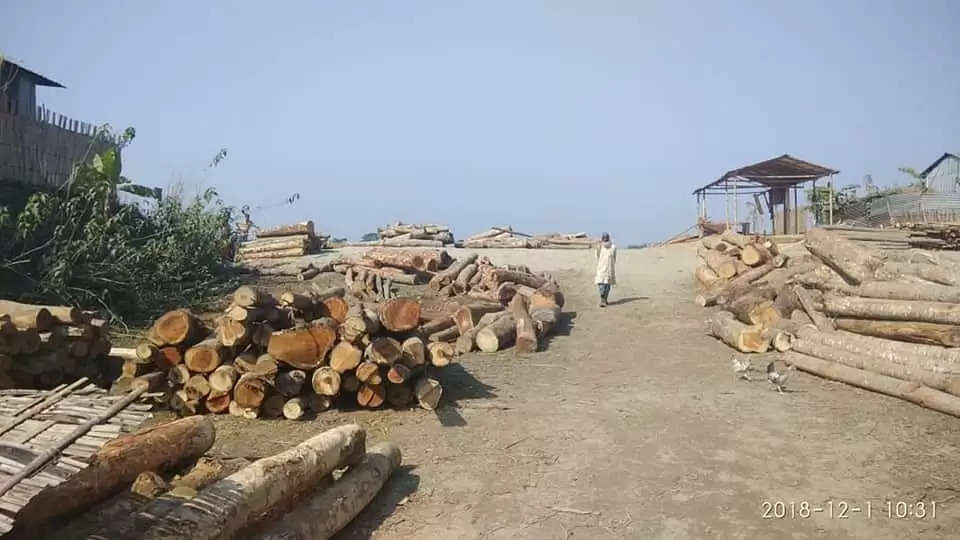 Tura: A huge number of illegal saw mills operating in the Garo Hills has been a matter of concern for various sections of people as it gives rise to various illegal activities. Though various attempts to shut down the operation of illegal saw mills has gone down in vain, however in what may be termed as a major breakthrough, a joint team comprising of Forest personnel, administration officials and police under the aegis of District Level Special Task Force Committee (DLSTFC) were able to shut down at least 6 illegally operating saw mills between the Bhaitbari to Chibinang areas in West Garo Hills.

The Chibinang area has become the hub of the illegal timber trade in Garo Hills with some sources putting the number of illegally operating saw mills at close to 40, all close to the border with Assam. Illegal trucks have been known to operate without fear in the region with some even passing through the area in broad daylight despite there being a GHADC Forest Check gate upon entry.

The operation was led by 2 teams, one led by the DFO Sachin Gavade and the range forest officer, Tengban Marak (in-charge Hollaidanga Beat) and another led by Sathish KS (Probationer ACF, O/O DFO (training) and Chinchin Sangma, RFO, Tura. The two teams were assisted by police officers led by PR Marak and WR Marak and other personnel.

The raid on the mills started at about 9 am and ended at about 2 pm with all materials found within the illegally operating mills being seized by the task force.

"We raided 6 illegally operating saw mills in the area which included Haribhanga, Bholarbhita, Katmil and Ghumaijhora. A huge quantity of illegal timber along with machinery for cutting timber, were seized from each depot," said a forest official.

"Earlier when we went to raid such areas (5 years ago), there was a 'gherao' operation by locals. This time the youth came forward to support us. It just shows that the youth are more aware about environmental losses," said DFO Sachin Gavade.

Matter of factly, the DFO added that the lack of industry as well as confusion with the Assam – Meghalaya boundary was causing problems and aiding in the creation of illegal saw mills.

Earlier this year, the same task force had carried on raids along the Bhaitbari area where they were able to shut down a similar number of illegal saw mills around the area.

As source who did not wish to be named stated that more raids could not be carried out due to economic as well as human resource constraints though the task force has promised to continue their crackdown on such illegal operators in the future as well.

The task force also thanked the DC, Ram Singh and SP, Dr MGR Kumar for their support in the matter.

"We appreciate the work being done by the task force in shutting down these illegal mills. These are now putting our survival at risk. All departments concerned should give themselves a pat on their backs. However the fight is far from complete. We hope similar exercises are carried on in other areas too where there are plentiful of these illegal saw mills," said SR Sangma, the president of CEPARD, an environmental NGO.