Meghalaya: Newly-elected MDCs sworn in as members of GHADC, formation of EC on April 21

Meanwhile, the formation of the new Executive Committee (EC) and election of the Chairman will be held on Wednesday. 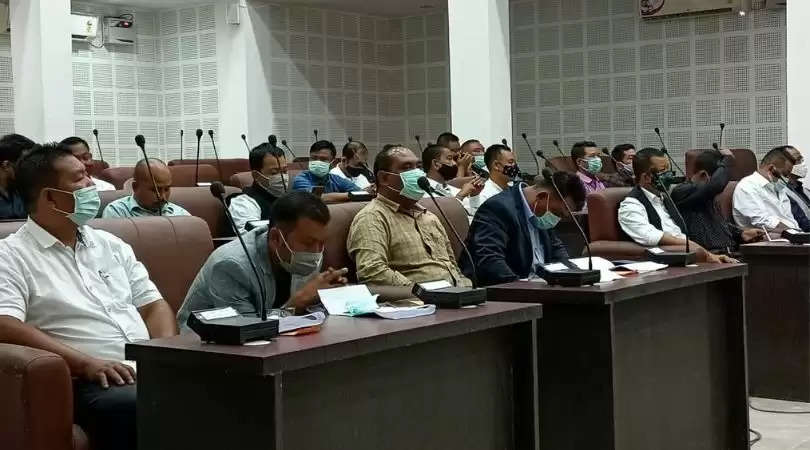 The newly-elected MDCs of the Garo Hills Autonomous District Council (GHADC) were sworn in as members of the Council on Monday, April 19.

Deputy Commissioner of West Garo Hills, Ram Singh, administered the oath on behalf of the Governor.

All the 29 newly-elected MDCs attended the swearing-in ceremony.

Meanwhile, the formation of the new Executive Committee (EC) and election of the Chairman will be held on Wednesday.

On April 17, Meghalaya Chief Minister and NPP President Conrad K Sangma, along with 15 elected MDCs of the GHADC had called on Governor Satyapal Malik at Raj Bhavan in Shillong to stake claim to form the new EC.

The 15 MDCs include 11 from NPP, three independents and one from the Garo National Council (GNC).

When contacted, NPP spokesperson Marcuise Marak told TNT-The Northeast Today that they are confident of forming the EC, with or without the support of the BJP.

When asked whether the claims made by the BJP that 17 is the magic number to form the EC and not 15, Marak said, “Our legal team is on the job. We have explored the situation from all sides and we are confident of forming the EC."

It may be mentioned that BJP MDC from Dalu Pramod Koch has extended its support to the NPP-led GHDC. “With his support, our number has risen to 16 and, with the nomination, it will go up to 17,” Marak added.

To a question on the demand for the Chief Executive Member (CEM) post made by the BJP, the NPP leader said, “There is no question of approaching the BJP since we are natural allies. We were very much welcome but, their statement on wanting the CEM post changed the perception. How can it be possible considering the numbers?”

WILL BJP JOIN THE NPP-LED ALLIANCE?

It is unlikely for the NPP to rope the BJP in as few MDCs of the GHDC coalition are not happy with some of the individuals in the BJP.

“There are some coalition partners who are not happy with some of the members from BJP. So, not in the name of the party, but as per their individual capacity, they’ll come,” Marak said while referring to the Koch's support.

When asked if this difference in opinions between the NPP and the BJP in the GHADC would affect the ruling Meghalaya Democratic Alliance (MDA) coalition, Marak replied in the negative.

“No, I don’t think so. All the MLAs from the BJP are very clear about the common minimum programme. But of course, from party lines, there are different views. But, it should not affect the coalition,” the NPP leader said.

The Bharatiya Janata Party (BJP), on the other hand, had stated that it would apprise the Governor of the fact that 15 was not the number required for staking a claim and alleged the NPP leaders of misleading the Governor on the issue.

When asked if the BJP had raised the issue with the Governor, party MDC from Tura Bernard Marak said, “I’m not sure because I came back (to Tura) for the oath-taking ceremony.”

Reacting to a question on whether the BJP would join the NPP-led GHDC, Marak said that they have not planned on joining the alliance as yet.

CONGRESS TO SIT IN OPPOSITION

Meanwhile, Meghalaya Congress on Monday decided to sit in the Opposition after the party fell short of three MDCs to form the EC despite having emerged as the single largest party in the GHADC elections.

“Since we do not have the requisite number to form the EC, we have decided to sit in the opposition bench and become constructive,” Congress spokesperson Zenith Sangma said.

Launching a scathing attack on the National People’s Party (NPP), Sangma termed the approach taken by the Conrad-led national party as “dangerous”.

“The way the NPP leadership and its party approached the MDCs to garner their support is very dangerous because (they are doing it) through horse-trading process by promising huge amounts of money,” he alleged.

Furthermore, the Congress leader said that the party is collecting inputs from constituencies that have failed to attain victory and would conduct a post mortem to diagnose the weakness and lapses.