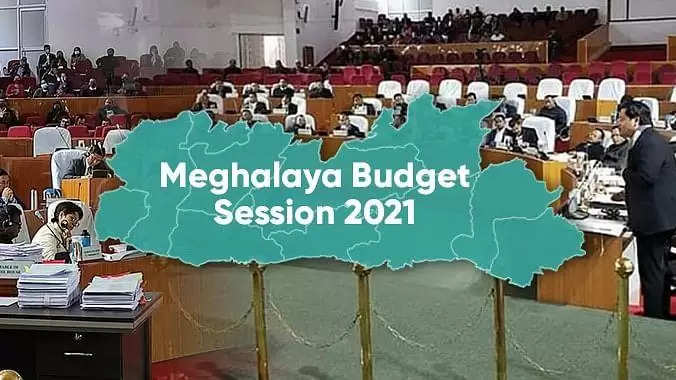 Meghalaya Speaker Metbah Lyngdoh adjourned the House for the day and scheduled further debate on the Governor's address on March 10.

"There is an intention to address issues of health, especially for women. How can these noble attempts of the govt on the early childhood mission to address MMR and IMR would result? Issues of women and children, what is it that stops the Government of India from looking into the lack of Specialists in medical health centres?" questions Ampareen.

"We need to have a common approach in any intervention in the health sector in the state," she adds.

"If left to the wisdom of the leaders, the problems will remain unresolved. The only way out is the amendment to Guv's address is to insert a recommendation for the formation of the Interstate Border Commission," says Ampareen.

"I would like to find out and ask for a revisit of the governor's address to the JAIKA project for the re-installation and improvement of the bridge," she says.

“Why has the price of ginger dropped and ginger farmers are suffering,” Lyngdoh questions Agriculture Department.

Lyngdoh continues by stating that the kind of protests that are happening in the state give rise to chaos and disruption of peace. "People should be heard, citizens should be heard in due time. Why do we have to create chaos to get the Government's attention?"

"The mob attack on RTI activist Agnes Kharshiing and Anita Sangma. The Them Mawlong issue, the death of Lurshai Hynniewta at Ichamati during the anti-CAA protest, and the Umoid incident where construction workers were attacked. What is the current progress of these investigations? questions Lyngdoh.

Umroi legislator George Lyngdoh wishes a Happy International Women's Day to all women in the State.

"Hope empowerment will come true for women," he says.

"However, the situation for women in the State looks grim considering the rise in crimes against women and children, he adds.

"Our women and children are not free and there is an observation that there is a very week approach from the Home Department to sensitise people on POCSO Act," says the Umroi MLA.

Lyngdoh stresses on spreading awareness to sensitise men and young adults to lower the crime rate.

He also raised issues on hate messages by miscreants who post videos and comments on social media to disrupt communal peace and tranquillity.

"What actions have been initiated against these miscreants?" questions Lyngdoh.

"In the Power sector, the Governor's speech did not cover the status of rural electricity. How many houses are electrified in the state in both rural and urban areas?" questions Shangpliang.

"In the C&RD Department, the flow of funds from the Centre is very irregular with huge liabilities pending in terms of materials," says Shangpliang.

"There is no mention in the Governor's address on a report of the Meghalaya Aquaculture Mission," says Shangpliang while asking the government to provide an accurate and latest report concerning the mission.

"Governor's speech does not mention the steps taken by the government for the welfare of the teachers," says Shangpliang while appreciating the Governor's suggestion to the Chief Minister to consider accommodation for contractual teachers, who are on an indefinite hunger strike since last week at Malki ground in Shillong.

Opposition whip PT Sawkmie moves a motion of amendment to the Governor's address since it "misses" many important points. Mawsynram MLA HM Shangpliang supports the motion by stating that the Governor's address was silent on the status of the Inner Line Permit. "In the Planning Department, the construction for Eklavya schools is not in the hands of the State Government. How is the government planning to execute these projects?" questions Shangpliang.

A zero-hour notice was brought up in the House by Nongpoh MLA Mayralborn Syiem on a media report regarding the recent meeting between Union Home Minister Amit Shah, Chief Minister Conrad Sangma and Deputy Chief Minister Prestone Tynsong.

"The construction of the Mendipathar entry point is completed," says CM Conrad Sangma, while expressing hope that the centre will be operational soon.

Meghalaya Chief Minister Conrad Sangma greets all four women legislators along with all women working in the Legislative Assembly on the occasion of International Women's Day.

Chief Minister Conrad Sangma confirms reports concerning the deaths of miners in Sorkari near Dienshalahu Village in East Jaintia Hills. He said that as per the postmortem report; the miners died because of trauma leading to multiple fractures and haemorrhage. The CM further informed that arrests were made after receiving information about the accident. “One person was arrested, and an attempt was made to arrest another individual, but both of them received bail,” he said, adding that they registered the case under several sections of IPC and 21 (5) section of MMDR Act and 3/4 of the Explosive Substance Act.

Responding to a question raised by UDP MLA Balajied Kupar Synrem, Health Minister A.L Hek stated that the construction of the Ayurvedic PHC at Saikarap is yet to be completed. "The project which began in 2011, is yet to be sanctioned," Hek said, adding that two units are yet to be completed after the allotted contractors surrendered without citing any reason. "The process of allotting the work to new contractors is on," Hek informed.

Reacting to a question raised by Congress MLA PT Sawkmie, Rymbui states that 17 MPS posts have already been advertised by the Meghalaya Public Service Commission and 2019 posts advertised by the Central Recruitment Board. "The process of recruitment is on and hopefully within a few months, the posts will be filled," says Rymbui.

Home Minister Lahkmen Rymbui informs the house that at least 2,228 posts are lying vacant in the Home (Police) department right from Grade IV to the top post.

Umroi MLA George Lyngdoh addresses the issue of African Swine Fever. "Many pigs from Ri Bhoi have died, some farmers have lost almost 20 pigs at once." "It would be helpful if farmers are compensated." "The department (Veterinary) is working out. The total death of 540 (pigs) will be compensated," says Deputy Chief Minister Prestone Tynsong.

The second day of the Budget Session will likely witness a range of issues being raised by the Opposition bench besides debating the Governor's address.

The Budget Session of the Meghalaya Legislative Assembly entered the second day on Monday, March 8 in Shillong.