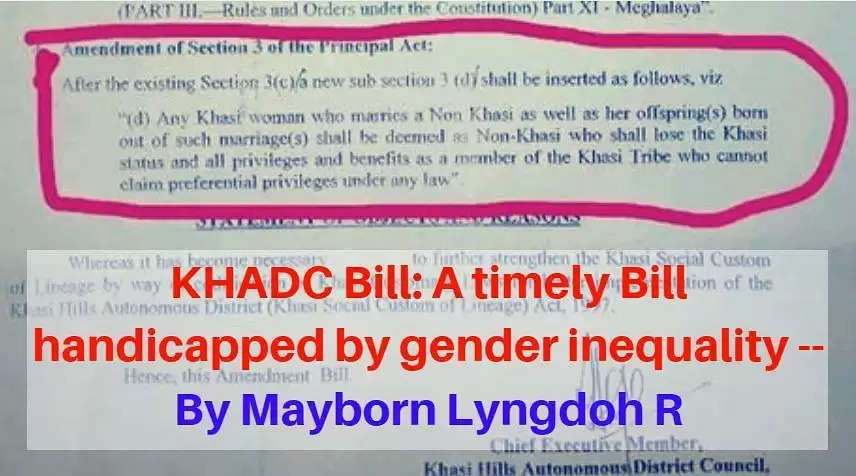 Epistle to the beloved Khasi women-folk

History was made on 24th July, 2018 when "The KHADC has given its approval on a social custom Bill that will strip a Khasi woman of her ST status and all privileges associated if she marries a non-Khasi" (TNT).

Like many I am also skeptical of the Bill, but on different grounds and different levels of understanding. It is true and highly illogical for a bill to take away the right of a Khasi woman of being a Khasi if she marries a non-Khasi. This is sexist. Why should only the women bear the brunt? Why not the men? Why should the men-folk be let-off easy for later?

With that being said, the Bill would've been a magnificent tool should it be unbiased. I have read several personal posts including an open letter that talks about identity crisis, the right to choose one's own partner, the right to belong, and forced marriage of the very few that were highlighted.

I can understand the anger and the animosity. It is just. It is right. It is reasonable. I concur, "No bill has the right to take away the Khasi identity of a woman (Or a man)." That is something innate and inborn.

The Bill was wrongly framed.

Another drawback, is the sensitisation provided by beautiful headlines of a local newspaper, "KHADC passes Bill to prevent Khasi Women from marrying non-Khasis". This is enough to instigate a crowd. Many are channelised on how and what to feel. Its all part of media psychology. A classic example is the rape case of Asifa Bano. The whole Nation cried including Shillongites. We wrote, we mourned, we wept, we marched. There are 31,000 rape cases pending in High courts of the country. As per the latest statistics,over 400 rape cases involving minors are pending for disposal in various courts under Protection of Children from Sexual Offenses (POCSO) Act in the state of Meghalaya alone, but no candle was lit, no school marched and no one wrote. Why? Because they were not sensationalised.

Many women feel that their right has been taken away from them. It is understandable. Many that are already in a relationship with the non-tribals are in a dilemma, and the off-springs of the inter-racial wedlock are feeling out of place. It's a tough pill to swallow. It's not easy. It's hard!

If comprehended positively, the Bill concentrates on protecting the Khasi population from the "silent invasion" through marriage. Most of the Khasi women in Shillong are outraged because of their high intellectual capacity to comprehend at their own free will, and the cognitive power to choose and know what is right for them – but if we venture and take a dig only 30-70 kms at Ribhoi district, we will find how marriage is used as a tool to its utmost potential. Every nook and corner of Ri-Bhoi is infested with immigrants trying to etch a forceful tribal identity.

Let alone Ri-bhoi, Shillong in itself is filled with opportunistic immigrants. At the present, we cannot prospectively visualise what the future holds but honestly, the future looks grim. We can only hope.

If we are to dig history, we'll find The Aboriginal and Torres Strait Islander (Original inhabitants) population of Australia as at 30th June, 2011 to be 669,900 people, or 3 percent of the total Australian population. (Census 2016, The Conversation).

As per the 2010 Census by the United States Census Bureau, the U.S. population on April 1, 2010, was 308.7 million. Out of the total U.S. population, 2.9 million people, or 0.9 percent, were American Indian (Red Indians) and Alaska Native (Original inhabitants).

If we are to also venture, the indigenous population in North Eastern states alone, the Indigenous Tripuri population in Tripura that once dominated the population sector in the state, now makes up to only 30 percent of the total population (India Population 2018).

There are hundreds of tribes that are lost as a result of invasion, conversion, and matrimonial alliances. Their indigenous tribal population accounts for only 5 percent of the world population.

When the Europeans arrived, carrying germs which thrived in dense, semi-urban populations, the indigenous people of the Americas' were effectively doomed. They had never experienced smallpox, measles or flu before, and the viruses tore through the continent, killing an estimated 90 percent of Native Americans.

Over 1500 HIV cases have been reported in Meghalaya so far as per the data provided by the Meghalaya AIDS Control Society (MACS) that showed the cumulative number of HIV Cases in Meghalaya in the year 2014-15 as 1541.

Why I am trying to highlight here is that we are exposed, we know the plight, we know the consequences, but we will never admit. We are too accommodating at our own expense.

I am moved by the stories of many women and I am with them, but if we are reasonable enough to visualise, we'll realise that the inspiring stories of a few good women that happened to meet a few good non-tribal men are just a few stories in a book of a thousand stories. People do marry out of want of material possession alone. The question of love was never there. The number is clearly overlapping in comparison to the genuine and real love stories. For many, it is a modern-day barter system whose actions are pernicious, harmful and destructive.

It is difficult to tell the genuine from the fake. Sometimes the fake looks more real. Laban, Nongmensong, Pynthorumkhrah, Mawbah, Laitumkhrah, Polo, Club, Nongthymmai, and the many parts of Ribhoi, Jaintia Hills and West Khasi Hills are filled with opportunistic men (not all) at the cost of the tribals.

No, we are not going to replicate Tripura. It's horrifying!

This Bill is the best thing that can happen after 1972, and the Land Transfer Act, it might just save our children and our children's children from being homeless. Clearly, our businesses are lost, Iewduh is captured, Khyndailad, is captured, Laitumkhrah, Nongthymmai, Nongmensong, and several other trading points in every nook and corner of Meghalaya is captured. Our offices are filled, and most lands are bought. The price of the lands has multiplied by a thousand fold in recent years, occupied by names that sounded Khasi only at the end. Most of the shops in Iewduh are owned under a Khasi pseudonym, managed and traded by an opportunist immigrant.

Presently, the situation is debatable, twenty years from now it will not.

I am not a bigot but sacrificing our existence and future for the sake of a few good men (non-khasis) is too great a risk to take because the ones grabbing the opportunity are pure opportunists.

In conclusion however, with this Bill in play, our men will have to step-up and be good enough for our women. Most of us are not worthy to be taken seriously. With the current state of affairs, where the population of able and responsible Khasi men is quickly diminishing, I don't see a reason why a Khasi woman should not look for a suitable partner in a non-tribal man if needed to. At the end of the day, she has a right to choose what is right. And if the man she so chooses is good enough, be it tribal or non-tribal, he should be able to take care of her, fend for her and protect her, even if she comes to him naked without an ancestral property to follow.

The writer can be reached at calebdelshe@gmail.com