Apart from the demand for suspension of the top officials, leaders of other pressure groups also addressed the protestors seeking justice for people who have been killed in the past, including Lt. Lurshai Hynniewta, who was killed during an anti-CAA rally in February 2020 at Ichamati. 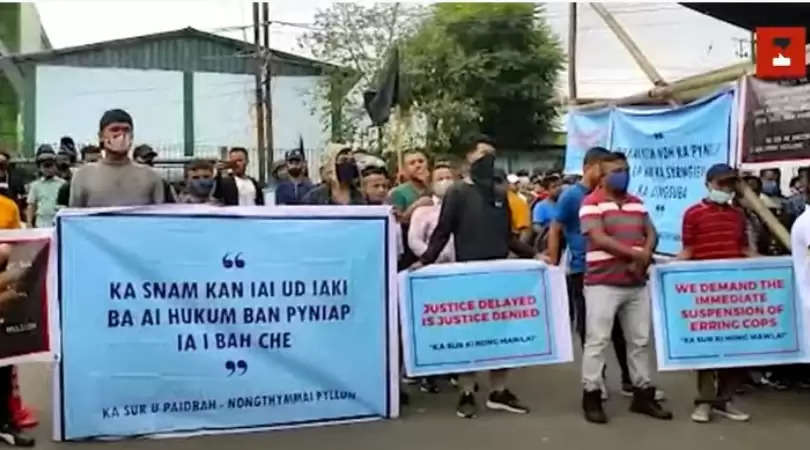 Three organisations under the umbrella of 'Voice of Mawlai People' held a sit-in protest near Shillong Civil Hospital at Barik on Monday against the government’s delay in suspension of the police officials involved in the Cheristerfield encounter.

Members of Khasi Students Union (KSU), Federation of Khasi, Jaintia and Garo People (FKJGP), and Hynniewtrep National Youth Federation (HNYF) – Mawlai Circle, along with residents of several localities from the city participated in the demonstration demanding justice for the ex-militant who was killed in a supposed encounter by police on August 13.

“What you have seen today is just the first step of our agitation. We will keep pressurising the government till they respond to our demands,” said Khrawkupar Nongsiej, president of FKJGP Mawlai Circle, adding that the demonstration was held in consultation and support from the Mawlai Town Dorbar, a local body of the Mawlai agglomeration.

Apart from the demand for suspension of the top officials, leaders of other pressure groups also addressed the protestors seeking justice for people who have been killed in the past, including Lt. Lurshai Hynniewta, who was killed during an anti-CAA rally in February 2020 at Ichamati.

The NGOs collectively said that they will hold a series of agitations against the government’s delay in addressing a charter of demands, including the Inner Line Permit (ILP), in the near future.

Speaking about the reports of a rift between the members of “Ka sur ka bri u Hynniewtrep” (the Voice of Bri Hynniewtrep), Rapborlang Nongrum, president of KSU Mawlai Circle, said that the three organisations don’t want to be a part of the larger conglomeration as they want to represent the people of Mawlai first before associating with a larger body.

On similar lines, Nongsiej said, “Just because there is another group (Ka Sur Ka Bri U Hynniewtrep), you can’t say that the voices of the people of Mawlai are divided. We, the three organisations (KSU, FKJGP and HNYF), want to continue our agitation under the "Ka Sur Ki Nong Mawlai" (Voice of Mawlai People).”

He further added that there cannot be two groups representing the same people. “It depends on them (Ka Sur Ka Bri U Hynniewtrep) if they want to work with us or not...everyone has their own right to protest,” he said.

On September 15, the Voice of Mawlai People had formed a new umbrella organization (Ka Sur Ka Bri U Hynniewtrep) uniting various groups from across the Khasi and Jaintia hills to intensify the demand for justice for the death of Cheristerfield.

But on September 19, there were reports of rift between the members of the new organisation.