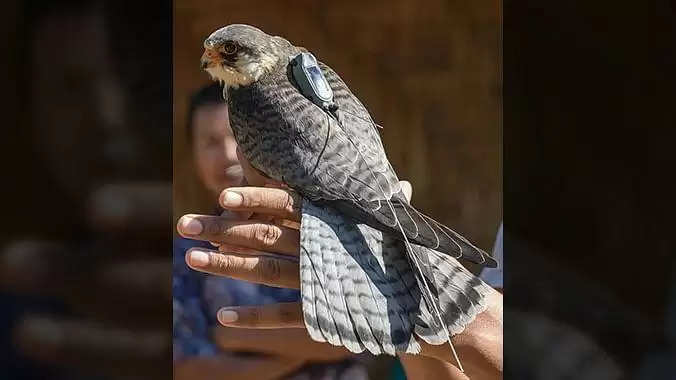 Chuilon and Irang, the radio-tagged Amur Falcons, arrived in Manipur after completing one migratory journey that covered 29,000 km in 361 days.

Confirming this on their official Twitter handle, the Ministry of Environment, Forest and Climate Change posted the following tweet, “The people of #Manipur, particularly in Tamenglong district, where the two Amurs were tagged in November 2019, had been anxiously awaiting the arrival of the tagged #amurs and this has now come true”.

“A milestone has been achieved in the conservation efforts of birds, as an #Amur named Irang, tagged in #Manipur has returned to the state after completing its migratory route full circle and covering 29,000 km. Another Amur named Chiulan has also arrived in the state yesterday,” the tweet added.

“Chiulon and Irang are completing one complete cycle of the migration journey in 361 days. They have arrived in Manipur on October 25 and 26 respectively. It is a rejoicing moment for the people of Tamenglong District. Let us pray that they are safe and continue to migrate further for many cycles,” stated the Facebook post by the forest division of Tamenglong

The Amur Falcon, locally known as 'Akhoipuina', is known for its capability to fly the longest distance in one go.

The Amur Falcon is said to breed in East Asia and migrate to northeast India, Sri Lanka, and sometimes to Thailand, Cambodia, and up to the Arabian Sea and parts of Southern Africa.