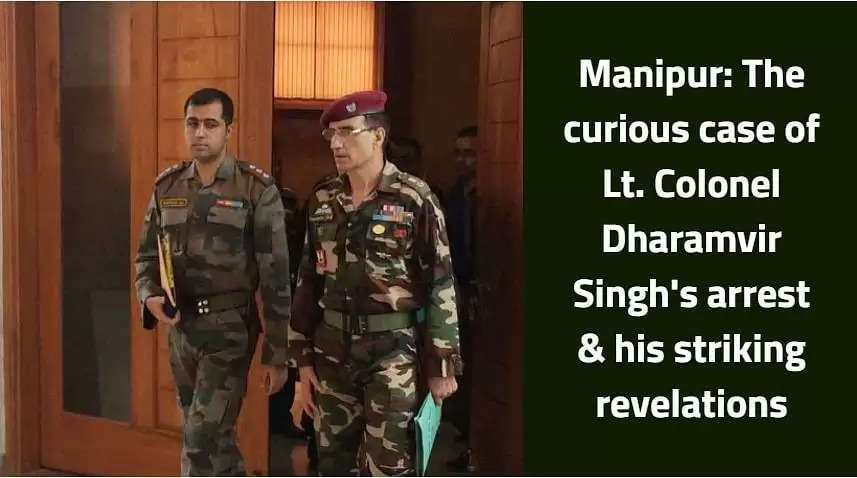 The petition alleged that Singh was reportedly taken away from his quarters by armed jawans, led by Lieutenant Colonel Nanda and Major Rathod in the morning hours of July 1, who have also been directed to appear before the court.

An FIR has also been lodged with the police by Lt. Colonel Dharamvir Singh's wife against the two officers who had allegedly kidnapped Singh and had claimed that she was not provided with any information regarding her husband.

Lt. Colonel Dharamvir Singh of 1st Para Commandos, (Special Forces) had been in active service for the last 32 years and has a decorated status. Dharamvir was serving as officer commanding, 3 CISU at M Sector, Imphal when he was allegedly arrested.

As per a local daily Imphal Free Press report, Dhamramvir's wife submitted an affidavit to the High Court of Manipur on his behalf on July 20, 2018 which mentions a few possible reasons why he was put in military custody.

Army's systematic custodial murders exposedThe affidavit said Dharamvir had written a complaint to the Army authorities in September 2016 about the Corps Intelligence and Surveillance Units's extortion and fake encounter activities perpetrated on innocent individuals from Manipur. He stated that Manipuris were picked up from various places and murdered in cold blood. However, the Army authorities had mounted pressure on him and he was made to withdraw the complaint letter on assurance that suitable action will be taken.

Afterwards, some senior officers had turned vindictive and there has been an organized campaign to harass him, the affidavit said.

It further states that his arrest on July 1 by army officers in front of his family and further detention for almost 10 days was a vindication of this theory. The affidavit appealed to the Court that this harassment is feared will continue in future and there is a potential threat on Dharamvir's life and family but prayed the Court to deliver justice to the families of the murdered victims.

The affidavit further mentions that only one unit and one particular team of the CISU was responsible for the killings and extortion. It further divulged revealing information on the murder of Phijam Naobi, RK Ranel and Th Prem who were slaughtered behind the unit's mess in Dimapur. It also details the manner in which Thangjam Satish and another unidentified person wer killed at Masimpur jungle by the same team. It also throws light on the custodial killing of PLA leader Gypsy along with another innocent person.

In total, five persons have been identified and the identities of two other persons are still not known. The affidavit also revealed that one lady along with her child was kidnapped from Dimapur by the same intelligence unit and later released after taking Rs. 1 crore from her family members.

The affidavit also urged the SIT instituted into killing of the three persons to summon the personnel of this particular unit and make them go through an identification parade before the wives who were there at the time of arrest.

It also called for a fresh investigation into the Thangjam Satish killing, and seek inputs of the personnel who were posted in the CISU during 2009 till 2012 to verify the facts.

However, the army has rendered the allegations as baseless and said it was an attempt to malign the image of the organisation.