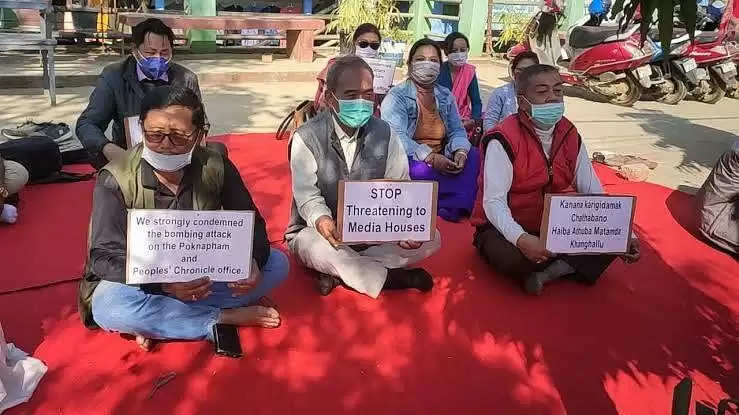 Newspaper and news channels in Manipur have halted all publications and broadcasting with immediate effect as journalists, once again, announced an indefinite strike following one of the eight resolutions passed during an emergency meeting between the All Manipur Working Journalists Union (AMWJU) and the Editors Guild Manipur (EGM).

The development comes just days after the northeastern state returned to some semblance of normality following a six-day shutdown of all newspaper offices and news channels.

The decision is a mark of protest against the threat imposed by unknown miscreants on the vernacular daily Poknapham, stated a press release issued by the AMWJU and EGM.

An unidentified miscreant, suspected of belonging to a militant outfit, hurled a hand grenade at Poknapham office on February 13 and demanded the media house to cease operations for six months.

However, no outfit has claimed responsibility for the attack.

Following the incident, the AMWJU and EGM urged the state government to take stern action against the miscreant and any group involved.

Although Manipur Police have refrained from making any comments, the state government has urged all news agencies to continue operations.

Meanwhile, the AMWJU and EGM have urged the individual/group to clarify their charges through email within 48 hours.