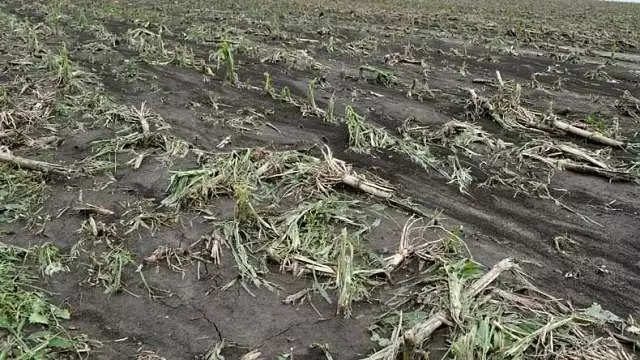 Imphal, April 2: Torrential rain which lashed several northeastern states for the last four days, have caused huge losses to farmers in the region especially Manipur. Farmers are suffering as most of their crops are completely destroyed by the downpour.

There have not been any proactive steps taken by the action committee formed by the Manipur government for alleviating not only the farmers but other sections of society as well.

The rain stopped on Sunday for a few hours after a heavy downpour on Saturday night.

The pre-monsoon rains hit the farmers rather hard. Vast fields growing cabbages, leafy green vegetables and others were destroyed by hailstorm in some of the northeastern states.

S.Thanil of Manipur said he earns a hefty income every year by selling cabbages from his farm, which weigh over 3 kg each. However, this time he will face losses.

"All the cabbages ready for the market were destroyed by the hails as big as a cricket ball. Nobody will buy the fast rotting cabbages from my farm," Thanil said.

Most other vegetables were also damaged by the continuous rains and hailstorm. The worst affected ones are those who grow potatoes. When there is no blockade or landslide, one kg of potatoes brought from Assam and Meghalaya is sold around Rs 30 in Manipur.

The price came down as the local potatoes hit the markets. However, the stagnant rain waters have submerged vast areas of potato fields in the valley districts. Farmers of squash in Mizoram or ginger in Meghalaya are also facing the same problem.

Tompok, a potato farmer in Imphal east district, said: "Every year I earn substantial profit. However, I doubt if I will be able to earn enough to pay the labourers this time."

There is already a distress sale with retailers demanding as low as Rs 8 a kg. Customers are buying very low quantity since the vegetables cannot be kept for long.

Meanwhile, the water levels of some major rivers receded on Sunday morning, while many residential and public places were waterlogged.

Displaced persons whose houses have been partially submerged are staying in community halls.

The action committee formed by the government with Irrigation and Flood control Minister Leppao Haokip as its chairman is yet to plug the small breaches in river banks, construct relief camps or distribute cooked food and drinking water to those who are staying in the community halls.

Though rains stopped for some hours, the sky is still overcast and the weather office has forecast more rains. Rains have triggered landslides in the mountainous national highways.

In the Imphal city, the main road leading to two important hospitals, including the central medical college, RIMS, was depressed.