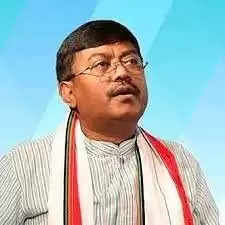 Manipur Pradesh Congress Committee (MPCC) president Govindas Konthoujam has accused the BJP government at the centre and state for making fake promises and playing with the sentiments of the Naga people.

While addressing reporters at the Congress Bhavan in Imphal on Sunday, Govindas levied several charges against the BJP concerning the much-debated Naga Peace talks.

“Only Congress can bring peace in the region,” Konthoujam said.

He also stated that the Mizo Accord of 1986 and the Assam Accord of 1985 were all signed under the Congress-led government.

Besides this, the MPCC president slammed the BJP for the fake promises made to roll back the seven new districts created against the will of United Naga Council (UNC).

The BJP had earlier promised for the rollback the newly created districts after coming to power in the state.

"The much-hailed Go to Hills and Go to Village initiative by the BJP exists only in name, as the ruling party had done no work for the development of the state so far," Konthoujam said.

Also Read: EDITORIAL | Climate Change: Enough with the talks, it's time to act!