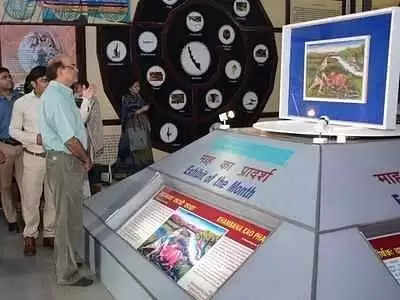 A traditional object 'Khambana Kao Phaba' (A painting on canvas) from Manipur was display in the indoor exhibition building Veethi Sankul, under the popular museum series 'Exhibit of the Month' of Indira Gandhi Rashtriya Manav Sangrahalaya.

The exhibition was inaugurated by additional secretary and financial advisor at ministry of culture, R.K. Chaturvedi, and director of IGRMS Sarit Kumar Chaudhuri.

The exhibit of the month has been curated by museum associate N. Sakamacha Singh. Throwing light on the exhibit, Singh said, "The painting shows an eposide form the epic of Moirang Kingdom where the hero Khamba was driven into a death-trap by the villain Kongyamba.

The villain asks the hero to kill a giant bull but traps the hero when he comes. But the villain's intentions to kill Khamba are defeated when the hero tames the bull after recognizing it as the former head of the herd in his father's cattle.

The hero caught the bull by the horns and whispered the name of his father and showed a silk rope to the bull, after which the bull recognized Khamba and started obeying him." The painting was made by veteran Manipuri artist late M Betombi Singh at the palace of Sana Konung, when he was 93 years old.

The tales from Manipur often depict the stories of romance, betrayal, political turmoil and a tragic end of lovers, that are based on the folk-lore, passed down from generation to generation through Moirang Parva, an oral narrative folk.