As per the report, 103 districts were considered for the ranking, out of which 64 districts belonged to the Front

Runner category while 39 districts were in the Performer category in the composite score and ranking of districts.

The first edition of the NER District SDG Index Report and Dashboard 2021-22 by NITI Aayog and Ministry of Development of North Eastern Region (DoNER) was released on Thursday.

During the launch, Dr Rajiv Kumar, Vice Chairman, NITI Aayog stated, "The North Eastern Region District SDG Index is an important milestone in our SDG journey aimed at leaving no one behind".

He said that it will strengthen SDG localization, by putting the districts, especially in the eight Northeastern States, at the forefront of SDG adoption, implementation, and monitoring.

The Index is a combined effort by NITI Aayog and the Ministry of DoNER, with technical support from UNDP. It measures the performance of the districts of the eight states of Northeast India -- Arunachal Pradesh, Assam, Manipur, Meghalaya, Mizoram, Nagaland, Sikkim and Tripura on the SDG and their corresponding targets and ranks the districts based on the same.

The index offers insights into the social, economic, and environmental status of the region and its districts in their march towards achieving the SDGs.

All districts in Sikkim and Tripura fall in the Front Runner category and, there are no districts in the Aspirant or Achiever categories. 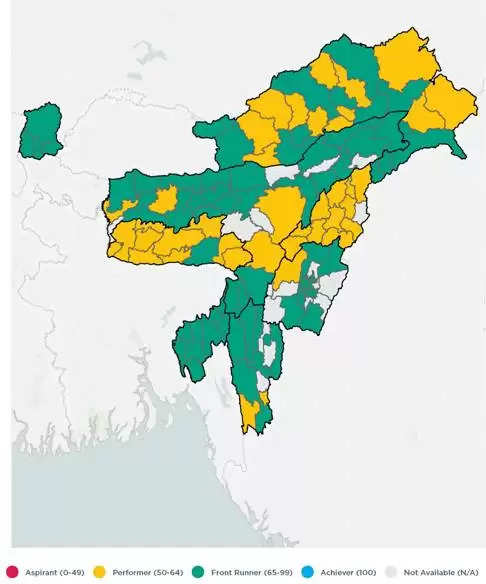 The composite scores of the Top-10 and Bottom-10 districts are given in the table below: