Borders of Northeast: Challenges and Prospects

Being the gateway to the Southeast Asian countries and having shared an international border with several countries, the Northeastern part of India, though holds the key to boost the country’s trade & commerce, is no longer a stranger to disputes and complexities. 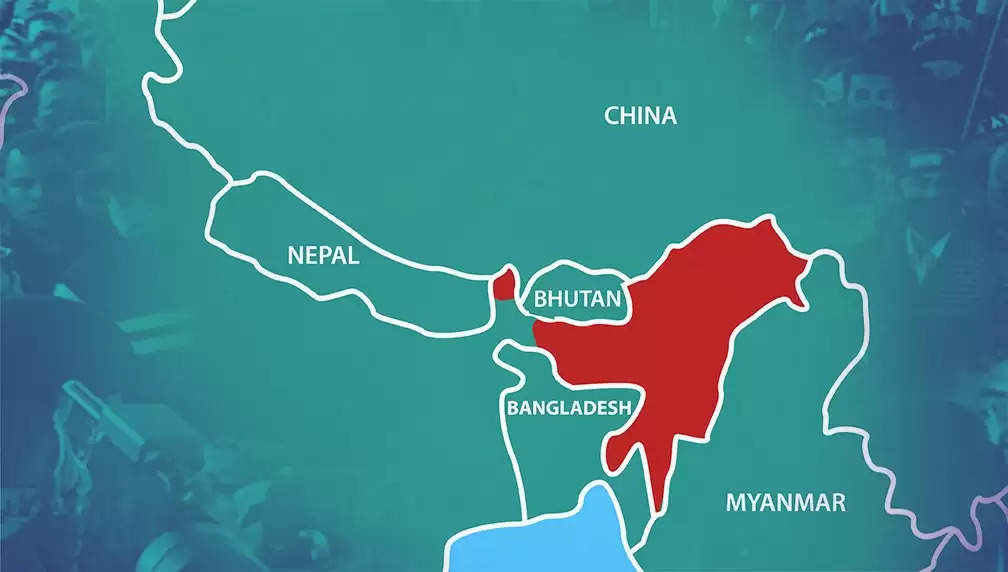 Northeastern India is gradually attracting academia and intelligentsia in and outside the country for its prodigious ethnocultural and linguistic diversities. Before the British rule, the Northeast was a trading and migratory route between the Indian sub-continent and its neighbouring countries in Southeast Asia. Today, it also fulfils the objectives of the Act East Policy to develop relations between India and ASEAN countries.

Northeast India comprises the eight states of Arunachal Pradesh, Assam, Mizoram, Manipur, Nagaland, Tripura, Meghalaya, and Sikkim, bordering Nepal, Bhutan, China, Myanmar, and Bangladesh.
Being the gateway to the Southeast Asian countries and having shared an international border with several countries, the Northeastern part of India, though holds the key to boost the country’s trade & commerce, is no longer a stranger to disputes and complexities.

Indo-Nepal Border
The Indo-Nepal border is an open international border running between India and Nepal. It is approximately 1,800 km, and Sikkim shares 97 km of mountainous border with Nepal. Siliguri, West Bengal links Sikkim with Bhutan, Nepal, and Bangladesh, while also connecting the isolated state to India.

This part of the border has historically been under dispute, encouraging India to embark on a slew of infrastructure projects along this line in order to cement border integrity and enhance both state and nation security.

Indo-China Border
The most controversial and the disputed international border of the Northeast region is the Indo-China border, totalling 3,488 km. Of this, Arunachal Pradesh shares 1,226 km, while Sikkim shares 220 km. In particular, China rejects the McMahon Line of 1914 that forms the northern boundary of Arunachal Pradesh, claiming large tracts of Arunachali land as its territory.

Since 1947, China has repeatedly led incursions into the territory, including building settlements, which ultimately culminated into the 1962 Sino-Indian War. The region is currently manned by the Indo-Tibetan Border Police, which operates 67 outposts across this part of the Himalayan range. The Ministry of Home Affairs, as part of its Indo-China Border Roads projects, as well as the Ministry of Defense and Border Roads Organisation, are heavily involved in developing border road tunnels, rail lines, and bridges to strengthen border infrastructure in favour of India.

Indo-Bangladesh Border
One of India’s longest borders is with Bangladesh. This complex border meanders through rivers, wetlands, agricultural land, and rural settlements. The northeastern states sharing a border with Bangladesh include Assam (268 km), Meghalaya (443 km), Tripura (856 km), and Mizoram (318 km).

There are 162 enclaves between Bangladesh and India for scrutinising bordering practices and sovereignty claims. Uncertain borders have not only raised bilateral tensions, but also led to undocumented migration, cross-border encroachments, human trafficking, and other crimes.
Unlike the Indo-China border disputes, the relationship between India and Bangladesh is not hostile, and border disputes have been resolved more amicably. This relationship is marked by the exchange of long-pending enclaves.

For example, as part of the implementation of the land boundary agreement in 1974 and its 2011 protocol, India offered Bangladesh 110 of the 111 enclaves and received 51 enclaves in July 2020. However, undocumented cross-border migration remains a persistent issue despite good bilateral ties. From 1979 to 1985, for example, Assam has witnessed a six-year-long agitation against increasing migration from Bangladesh. This undocumented migration was first addressed by Illegal Migrants (Determination by Tribunals) Act, 1983, which the Supreme Court of India nullified in 2005 for being a failure, and ultimately replaced by the Foreigners’ Tribunals.

Critics argue that Assam’s economic failings are the result of undocumented migrants replacing native workers. This controversy is further compounded by a lack of reliable statistics on such migration and settlement as proof in order that a bilateral solution is agreed upon. While the recent National Registration of Citizens (NRC) was carried out in Assam under the supervision of the Supreme Court of India to identify undocumented migrants, the exercise has been met with criticism over its authenticity and the erroneous inclusion of Indians.

Indo-Myanmar Border
India and Myanmar relations are marked by cross-border ethnic, cultural and economic linkages that predate the formation of both republics. India shares about 1,600 km of border with Myanmar through Arunachal Pradesh, Nagaland, Manipur, and Mizoram.

The Indo-Myanmar border is hilly and heavily forested. It is a porous border with ambiguous demarcation. Currently, the countries operate a free movement regime, but the borderlands have poor infrastructural development, with vast gaps in deployment. Members of various Northeastern rebel groups have historically exploited this dense region for hideouts. The Indian government has demarcated about 1,400 km of this border area, with 130 km in Arunachal Pradesh and 35 km in Manipur. Of the sanctioned 46 battalions, 31 battalions are mandated for counter-insurgency and 15 for border guarding, undocumented migration, trafficking, and smuggling.

A major task for this region is the ethnic cleansing of Rohingya people in Myanmar, an ethnic group that predominantly adheres to Islam. Numbering at 1.3 million, the Rohingya have faced displacement owing to Myanmar’s exclusionary citizenship laws, forced labour, religious persecution, and population control measures. This has made the community a soft target for terror groups, which is a major national security issue for India.

Hope for the Future
The Northeast of India, being bounded on all sides by international borders, while also being an ecological hotspot and mineral-rich region, has commercial, tourist, international trade, and national security value. Any stability and security will involve focusing on rural development, education, healthcare, infrastructure, border area development, and trade. This can only be achieved through internal cooperation among the states, which are also often in conflict with each other, while also resolving outstanding international border issues. Thus, planned diplomatic strategies are imperative for each type of border crisis for the long-term sustainable development of the region and profitable, rich bilateral ties.

ALSO READ: Intersectionality as an approach in addressing violence, education and employment