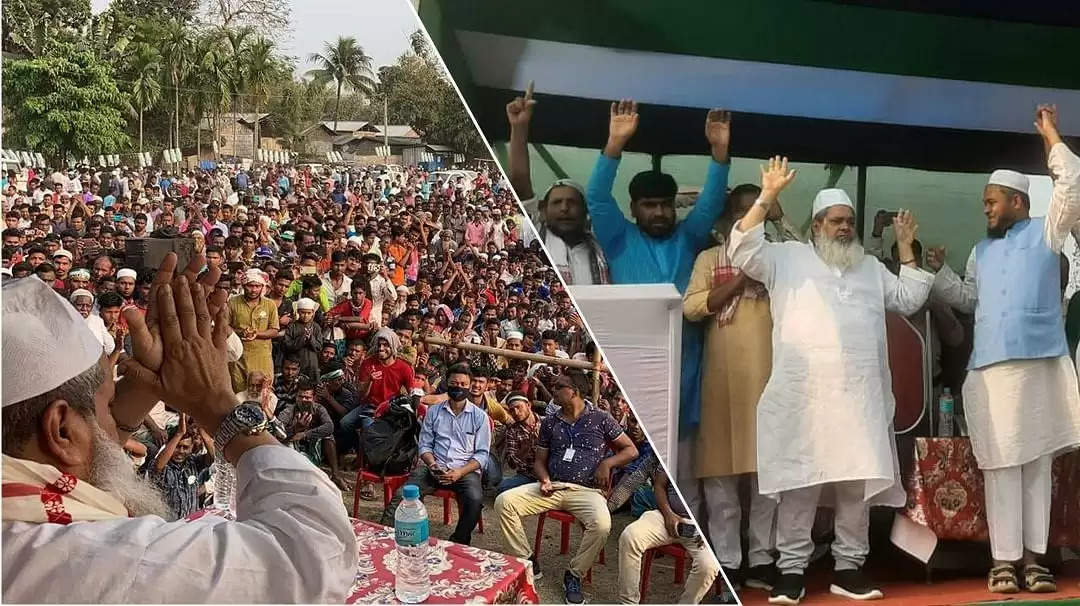 Why does Ajmal assume significance before an Assam election?

From the “Who is Badruddin?” remark made by the then chief minister and Congress leader Tarun Gogoi ahead of the 2006 Assembly elections, to the All India United Democratic Front (AIUDF - the party formed by Maulana Badruddin Ajmal in 2005) being a part of the Congress-led Mahajot (Grand Alliance) in 2021 – the Ajmal factor has always been at the centre of poll campaigns and debates before an election in Assam over the past 15 years.

To realise why, we only have to go 15 years down memory lane, and gauge his ascent and significance in Assam’s political landscape.

Hojai-based perfume baron Badruddin Ajmal had created a space in Assam politics 15 years back. He projected himself as the protector/saviour of the religious minorities (Muslims) who were apprehending harassment in the wake of the Supreme Court striking down the Illegal Migrants (Determination by Tribunals) Act, 1983.

The IM (DT) Act was operational as a guard for suspected illegal migrants from Bangladesh living in Assam and the apex court had scrapped the Act in response to a petition filed by then Asom Gana Parishad (AGP) leader Sarbananda Sonowal, the incumbent BJP chief minister in Assam.

But Ajmal led from the front, merging over a dozen minority-dominated political groups to form one party, the Assam United Democratic Front, in October 2005, re-christened as AIUDF in 2009, adding an all-India colour, even as it remains a factor in Assam till date.

There was no looking back for him since, as it contested the 2006 Assembly election and won 10 of the 126 Assembly seats in its maiden electoral battle against the ruling Congress.

Thus, Ajmal and his party came to be recognised in 2006 while his competitors became wary, including the Congress, which till 2006 had bagged the lion’s share of the minority vote in Assam.

In the 2011 Assembly polls, the AIUDF emerged as the biggest Opposition party by winning 18 seats. In the same year, BJP had won only five seats.

What’s even more significant is that AIUDF bagged three of the 14 Lok Sabha seats in the 2014 General Elections, with the winners being Ajmal, his brother Sirajuddin and Radhesyam Biswas.

But the descent came in 2016 when helped by a “Modi wave” and the narrative of illegal influx, coupled with an aggressive and assertive campaign, the BJP cobbled up the numbers and came to power, ending Congress’ 15-year run.

Ajmal’s party could only manage 13 seats, and Congress was pushed to a corner.

The fall of the AIUDF was apparent in the 2019 Lok Sabha polls as well. The Ajmal-led party bagged only one seat, that too by supremo Ajmal himself, who won from Dhubri, a Muslim-majority constituency sharing a border with Bangladesh.

According to reports, close to 35 per cent (1.22 crore) of Assam’s population are Muslims, with 46 lakh indigenous Assamese Muslims. About 45 lakh comprise Muslims of Bengali origin.

Today, Ajmal has a stronghold in the minority (Bengali origin)-dominated districts like Dhubri, Barpeta, Goalpara, Darrang, Karimganj, Morigaon and Hailakandi, a factor that makes AIUDF significant.

Now, upon a request by an ailing Tarun Gogoi last year to join hands with the Congress and other “like-minded” parties for a Grand Alliance, Ajmal’s importance in the Opposition camp has gained ascendancy. The common aim – to oust the incumbent BJP from power.

Ajmal too, softened his anti-Congress stand, realising the importance of countering the BJP’s narrative of the illegal influx threat to indigenous communities in the state.

More so, there was the common ground struck in the Opposition camp on the Citizenship Amendment Act (CAA), which the BJP is intent on implementing.

Then there is the NRC factor as well. The AIUDF chief has taken a stand in favour of updating the National Register of Citizens (NRC), maintaining that once the NRC is updated with March 25, 1971, as the cutoff date, the distinction between illegal migrants from Bangladesh and genuine Indian citizens will be clear.

Now, with battle lines drawn for the 2021 Assembly polls in the state, leaders of the incumbent BJP have been targeting Ajmal yet again.

From national leaders like Amit Shah to chief minister Sarbananda Sonowal and BJP’s key poll strategist in the region, Himanta Biswa Sarma, the common appeal is that “one vote to the Congress-AIUDF will clear Ajmal’s way to Dispur”.

Sarma, who is the lead campaigner, has been vocal against Congress-AIUDF, alleging the AIUDF will be a “threat to indigenous identity, culture and civilization” and claiming that the BJP will protect the identity, culture and civilization of Assam. The influential BJP leader has also downplayed the emergence of regional parties in the rivalry camp.

Ajmal has conveyed his decision that he does not want to be chief minister, should the Mahajot conjure up the numbers to win the poll.

He has also been critical of BJP leaders, making him the focal point of their poll campaigns.

Of late, Ajmal claimed that a viral video of him allegedly making a communal speech in a public rally has been doctored and circulated on social media to malign the party’s image ahead of the Assam Assembly elections.