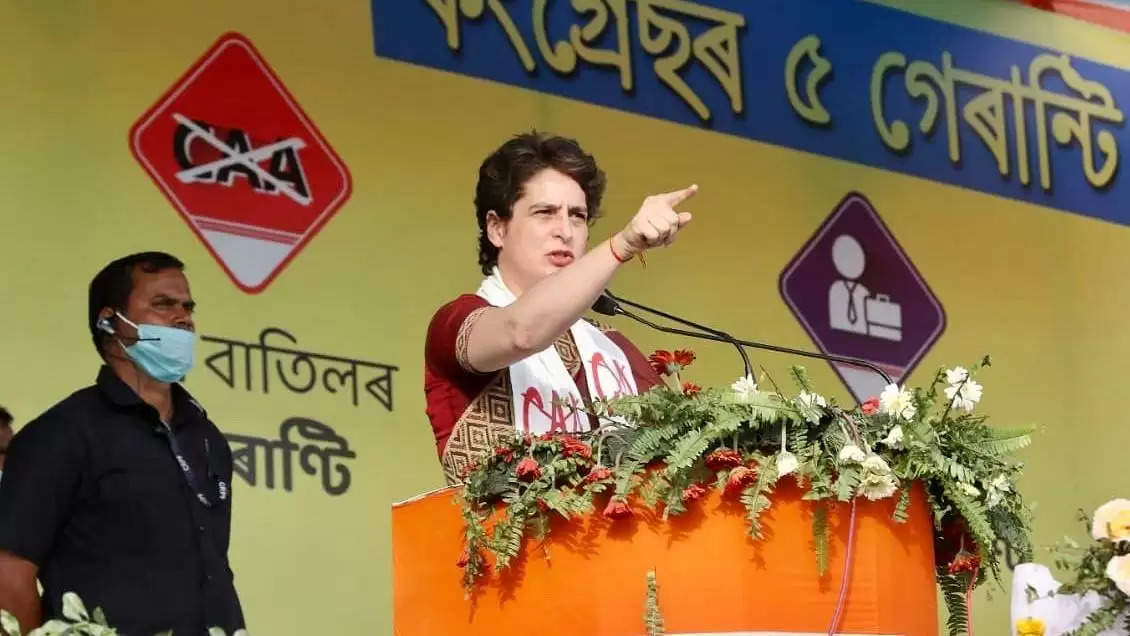 The party is undertaking five "Guarantees" for the election.

These guarantees include a law that nullifies the CAA, five lakh government jobs, raising tea workers' wages to Rs. 365, free electricity up to 200 units per household, and Rs. 2,000 monthly income support to all housewives.

"This election is an election of trust. The people of Assam were cheated by a party five years ago that promised them 25 lakh jobs but gave them CAA instead. The Congress party is not making empty promises but undertaking five guarantees," Gandhi said.

Explaining the rationale of the "Five Guarantees," Assam Pradesh Congress Committee chief Ripun Bora said the party had identified the top issues facing the people through the 'Asom Basaon Ahok' Yatra and was now presenting its solutions to the public.

Pradyut Bordoloi, the party's Campaign Committee Chief, explained the first guarantee, a law in the Assam assembly that would nullify CAA.

"After Congress wins the election on May 2, we will pass a law in the Assam assembly that won't allow the CAA to be implemented in Assam. We have already asked lawyers to draft such a law," he said.

"We have studied the state budget and consulted economists and have concluded that the best possible is 5 lakh jobs in 5 years. Since this is a guarantee and not an empty election promise, we wanted to be honest and come up with a figure that is possible," he said.

Debabrata Saikia, Leader of the Opposition in the Assembly, affirmed that the tea workers' wages shall be increased to Rs 365 per day within 30 days of Congress coming to power.

He said this was a guarantee already undertaken by Rahul Gandhi.

"We have studied the state of the tea business, and we think that if tea workers in Kerala can get Rs 380 a day, then hard-working tea workers of Assam can also get at least Rs 365. The tea planters can easily manage this, and we will make it happen within 30 days," he said.

Publicity Committee Chairman Rakibul Hussain stated that Congress is undertaking a guarantee of making electricity up to 200 units free for households to cushion the people against price rise.

"Two hundred units of free electricity would mean a discount of around Rs 1,400 on your electricity bill. For most people in Assam, this would make their electricity bill zero. We think such support is important because the price of everything is going up, from vegetables to diesel," he said.

Sushmita Dev, the party leader from the Barak Valley, undertook the fifth guarantee of Rs 2,000 to housewives.

"Society doesn't recognise the work women do as 'work'. Women toil all day in the kitchen, keeping the house clean, raising children. We hope the monthly support of Rs 2,000 will help them manage the house better and also spend on themselves at a time of high inflation," she explained.

Congress General Secretary in-charge of Assam, Jitendra Singh, said that the Congress hand has five fingers, and each one stood for a guarantee.

"There is a rising Congress wave in this election. That is why so many parties have joined the Congress-led Mahajot. The Bodoland People's Front, known as the kingmakers of Assam politics, has also joined us because they can see who's winning," Jitendra Singh said.

The party's campaign over the next one month shall focus on making every voter aware of the "Five Guarantees" and explaining the feasibility of the same.