The first day’s drive was taken out in 500 schools across the state, an official of the National Health Mission (NHM) said, adding that 30,000 health workers have been engaged for the week-long vaccination drive which will culminate on January 9. 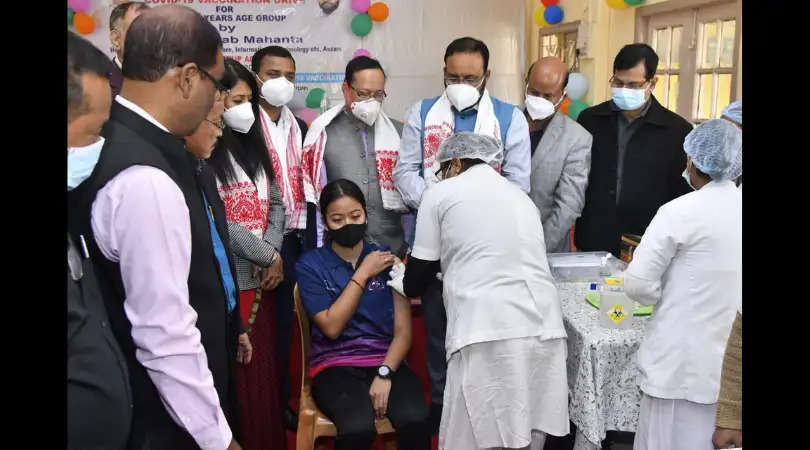 A total of 90,000 teenagers aged between 15-18 received their first dose of Covaxin in Assam as part of the nationwide rollout of Covid-19 vaccination drive for 15-18 age group which started on January 3.

The first day’s drive was taken out in 500 schools across the state, an official of the National Health Mission (NHM) said, while adding that 30,000 health workers have been engaged for the week-long vaccination drive which will culminate on January 9.

Assam Chief Minister, Himanta Biswa Sarma, launched the vaccination programme at Oil India HS School in Duliajan with a target to inoculate 20.37 lakh children aged between15-18 years during the drive.

Speaking at the programme, Sarma said that the day marks another important point in the long battle against the dreaded virus while remarking that level of infection and fatality among the fully vaccinated people is less.

“The state government is striving towards bringing all eligible people in the state under the ambit of vaccination. Till now, 3,76,80,000 people have been vaccinated in Assam, of which 2,17,36,397 have received the first dose. One lakh people are yet to get the first dose of vaccine in the state, of which, 70 thousand are from Karbi Anglong and West Karbi Anglong districts alone,” he informed.

“We are going to start rolling out a precautionary third dose of Covid vaccine for the frontline workers from January 10. Similarly, all senior citizens having co-morbidity and who have completed 9 months from their second dose, will also get the third dose from January 10. We are also planning to complete both doses of vaccination for the 15-18 age group within a short period with Bharat Biotech’s Covaxin so that they can confidently appear in their upcoming final exams” the chief minister added.

Vaccination was carried out at 978 COVID-19 Vaccination Centres (CVCs) till 6,30 pm on day one, an official of the health department said.

The state health department is planning to complete the first dose vaccination for all teenagers falling under the bracket by January 9 before the start of the third dose vaccination for healthcare and frontline workers, along with citizens above 60 years of age, from January 10 onwards.

According to the NHM release, a total of 5,854 children were vaccinated at 67 centres in Barpeta which was also the highest vaccination coverage on the first day for a district followed by Hojai with 5,425 inoculations, Kamrup Rural with 4,370 inoculkations, and Nagaon with 3,945 jabs.