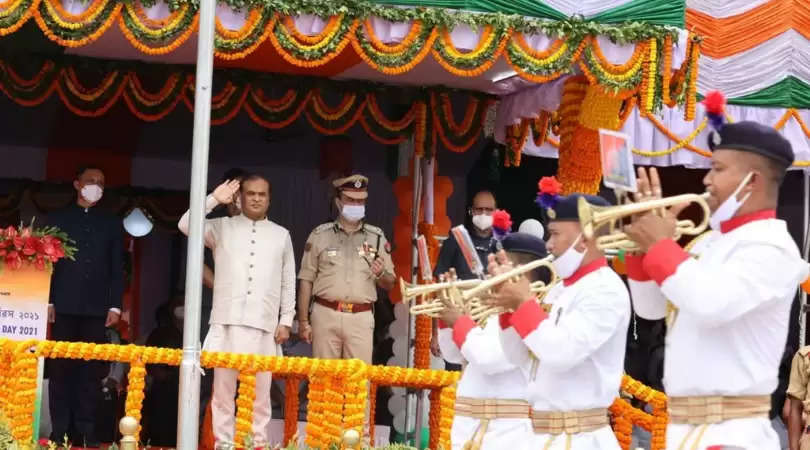 On the occasion of the country’s 75th Independence Day, Assam Chief Minister, Himanta Biswa Sarma hoisted the Tricolour at Khanapara Veterinary College Playground, Guwahati on Sunday. Addressing the gathering, CM Sarma said that the state is celebrating the occasion without any bandh called by militant outfits, including the United Liberation Front of Assam – Independent (ULFA-I), after many decades.

In his speech, Sarma also urged Paresh Barua, the leader of the banned outfit, to quit the path of violence and come to the negotiation table. “On behalf of the people of Assam, I appeal to Paresh Barua to come forward for dialogue. Let no youth of our state be killed anymore,” he said. This year ULFA-I has broken away from its 40-year-old tradition of calling a bandh on Independence Day on account of various issues, including the Covid-19 pandemic. Citing the example of Bodoland, Sarma highlighted how deliberations have brought peace to the region and have made the NDFB cadres surrender and join the mainstream.

Sarma also lauded the efforts of the Covid-19 warriors for their valiant fight against the deadly virus. Thanking the doctors, nurses, ambulance drivers, and everybody for their unwavering commitment to duty, Sarma said that with the help of the people, Assam has fought the crisis in an exemplary manner. Expressing satisfaction at the pace of the vaccination across the state, he further added that the government will administer 1.5 crore doses of vaccination next week.

Assam’s first medal-winning Olympian, Lovlina Borgohain also found mention in CM Sarma’s speech as he congratulated the boxer for her historic feat along with other members of the Indian contingent to the recently-concluded Tokyo Olympics. The CM also paid tribute to the six Assam policemen who lost their lives in the recent clash at the inter-state border with Mizoram on July 26. “We will never encourage or engage in border disputes with our neighbours. I appeal to all the states in the Northeast to come forward for discussions on the issue as that’s the only way we can keep the soul of the region intact,” said Sarma.

Before attending the state function, the CM had also visited Shraddhanjali Kannan in Guwahati to pay tribute to the freedom fighters. Following the Covid protocols issued by the state before the I-Day celebrations, around 500 people attended the state function.

Here are a few highlights from CM Himanta Biswa Sarma’s speech on I-Day:

*The CM appealed to ULFA-I leader, Paresh Baruah to return to the mainstream.

*He stressed that border disputes with neighbouring states to be resolved through dialogue.

* He said the government is committed to going the extra mile in liberating Assam from the scourge of human trafficking, drugs, and cattle smuggling.

* The state government will be increased the freedom fighters' pension to Rs 36,000 at par with the central remuneration, the CM said.

*The CM appealed to all Northeastern states to find a solution to the border issue through discussions.