According to the Health Department, the surge in the number of cases can be attributed to huge gatherings at poll rallies before the three-phase Assam Assembly elections. 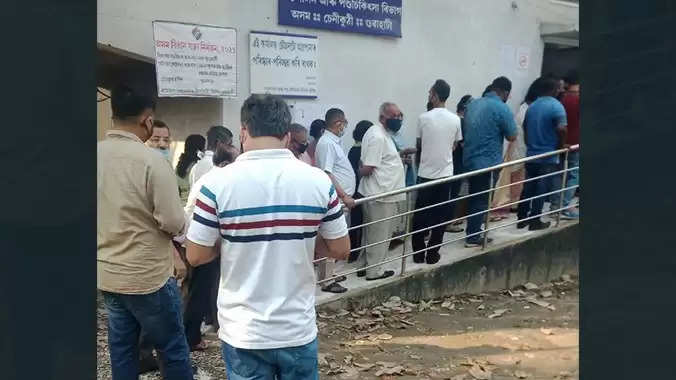 Assam reported 92 fresh COVID-19 cases on Tuesday, the highest single-day spike in the state this year.

According to the Health Department, the surge in the number of cases can be attributed to huge gatherings at poll rallies before the three-phase Assam Assembly elections.

Voters at many polling booths on Tuesday were seen violating social distancing norms, with many arriving at the booths without masks as well.

COVID-19 cases in the state had seen a rising trend in the corresponding period of last year, prompting containment measures from the district authorities.
Fresh fatalities have also pushed the state’s COVID death toll to 1,111.

Kamrup Metropolitan district reported the highest number of new cases at 26, followed by 14 in Jorhat district and 12 in Nagaon district.

In Jorhat, 11 students of DCB Girls College tested positive on Tuesday, with the district administration taking all necessary precautions to keep the situation under control.

Asked about the concerns in the wake of the surge in COVID-19 cases, Health Minister Himanta Biswa Sarma allayed apprehensions by stating that most cases were detected at airports and railway stations where COVID-19 protocols have been strictly implemented.

The Minister ruled out the possibility of lockdown as of now.
“We did not impose lockdown when Assam had 3,500 cases per day…. as of now, there have much lesser cases reported per day in the state,” Sarma said.